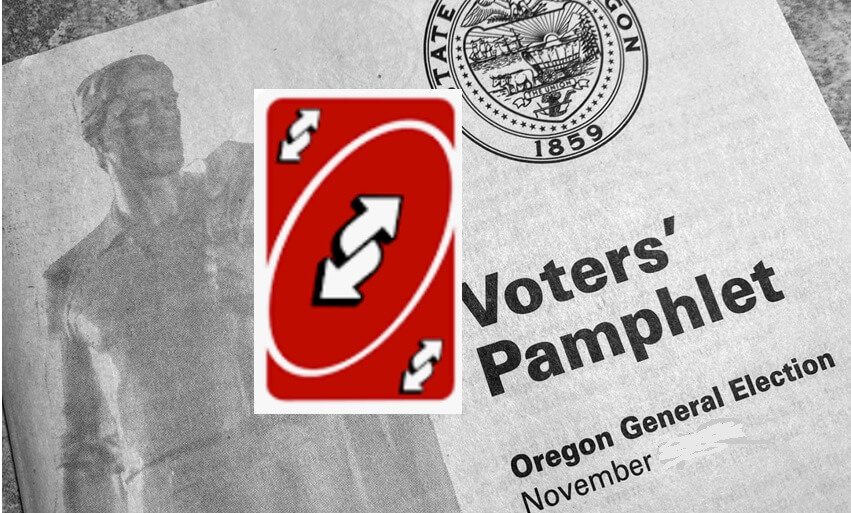 For nearly 100 years the referendum petition process has been about letting the public vote yes/no on a just passed bill.

It is clearly spelled out in the Oregon Constitution.

It is reinforced in the Washington County Charter.

We are familiar with referendums because we were the Chief Petitioner for a successful statewide referendum 19 years ago (Measure 30) and we have worked on many referendums ever since.

Our extensive experience has shown us that politicians dislike referendums because they must convince the public to get a YES vote at the ballot where the burden is greater.

Somewhere along the way, the politicians experimented with a way to reverse a referendum language and therefore put the burden on voters to obtain the YES vote instead of politicians.

A few years ago, citizens in Ontario launched a referendum against a sales tax passed by their City Council and forced the issue on the ballot giving voters the right to vote on it.  Ontario’s government decided to reverse the referendum by forcing citizens to vote YES to OPPOSE the sales tax and vote NO to SUPPORT the sales tax.  It was confusing.  It reversed the method of referendums and more importantly it was unconstitutional.   We issued a lawsuit at the ballot title stage and easily won.   The referendum law and referendum tradition stood — and voters soundly rejected the sales tax at the ballot by simply voting NO.

Now comes 2021-2022, where Washington County politicians speed out a ban on flavored vaping (which is severe enough to shut down numerous small businesses and their life savings with little advanced notice).  Citizens launched a referendum petition and qualified for the ballot.  Because of this, citizens now had a right to vote on the vaping ban with a simple YES or No vote.

Washington County decided to do what Ontario did by reversing the referendum, so that citizens would have the burden of passing a measure and not politicians.  Under this switch, voters would now have to vote YES to OPPOSE the measure and vote NO to SUPPORT the measure.

The Taxpayers Association of Oregon submitted an “opposition” Voter Pamphlet statement to the vaping ban under the “opposition” side, not realizing that Washington County altered the near 100-year process for referendums.

This was not discovered until we looked at the early, advanced County Voter Pamphlet offered online for military/overseas voters.   Even though we discovered it early, it was still too late to do anything.  There was only a little more than a dozen days or so from when our statement was first submitted and when Voters Guides went to the printer.   Our request to move or remove our statement was quickly moot and not possible.

We do not wish to cause confusion at the ballot.  Our confusion is based from the confusion from the Elections Office changing the near 100-year old process (which just happens to benefit politicians).   We saw no public hearing announcing that the County was going to violate their own Charter and the Oregon State Constitution.  Public notices are important because we are tracking 43 different local ballot measures on the May Primary Ballot.  We fear that this is a new trend among Election officials to make changes to election laws without public hearings or public votes as witnessed by numerous complaints making headlines.  We are awaiting a response from the Elections Office as we speak.  Until then, we feel it is important to get our statement out to help fix the situation right away for anyone who sees our voter pamphlet statement.  We want our position to be perfectly understood by every single voter.  We oppose the flavored vaping ban.  We want a yes vote to oppose it — as a yes vote now means to stop the ban (even though it didn’t necessarily mean that a few months ago).   Sounds confusing doesn’t it?

Below is our original statement amended to reflect our intent:

STATEMENT ON MEASURE 34-314 TO REPEAL THE VAPING BAN

1. Vaping is one of the most successful ways people quit smoking. Robert H. Shmerling, MD, Senior Faculty Editor, Harvard Health Publishing, said “…an analysis of 61 studies found that e-cigarette use was more effective than other approaches to quitting smoking…” (health.harvard.edu/blog 10/28/21)

3. It loses tax revenue. By destroying local small businesses you destroy the vaping tax revenue that is used to help cover health costs and prevention measures.

4. It wrecks legal businesses while boosting illegal ones. By destroying local small businesses you drive sales to the black market/online market which often pay no Oregon vaping tax.

5. It makes vaping more dangerous. When you close local shops you move people to use cheaper online vaping products of which many of these online sales are fake-brands and foreign products which are unregulated and more dangerous.

6. It destroys one business while the same shop across the street (county line) is untouched. County bans don’t work. They are unfair.

For more information go to OregonWatchdog.com.
The Taxpayers Association of Oregon has been fighting high taxes and government waste, fraud and abuse for over 20 years.

Please spread the word that this product ban is unfair and harmful and to vote YES to 34-314 to oppose the Washington County vaping ban.