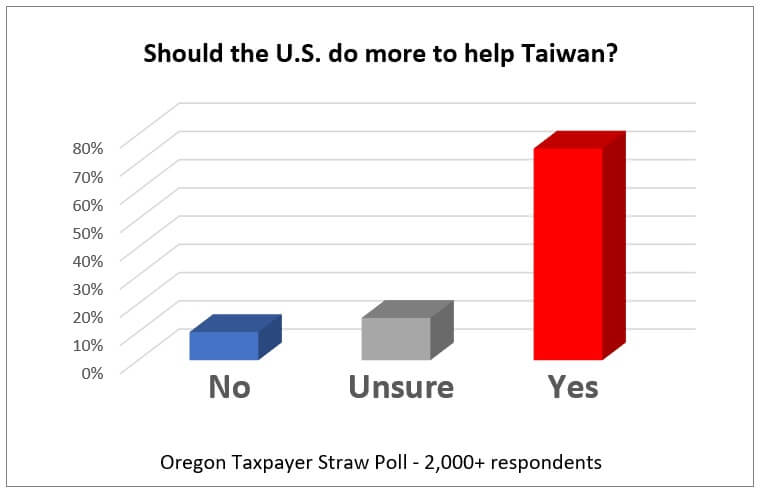 Last Fall, the Taxpayers Association of Oregon Foundation sent out a 50 question straw poll survey to their supporters.  Over 2,000 Oregonians responded.

The foreign policy question was “Should the U.S. respond to China’s recent actions and statements regarding invading Taiwan with increased funding, military training, advanced weapon sales to support Taiwan’s defense?”

Here are the results:

The results demonstrate that Oregon taxpayers favor a strong defense for Taiwan and greater US involvement.

This poll was taken last November and December 2021 at a time when China was broadcasting threats of military action against canyon that interfered in their region and over Taiwan.   Since then, the situation and tensions have only increased with House Speaker Nancy Peolsi’s visit to Taiwan.  The question posed dealt with American providing more direct support for Taiwan.  It did not ask whether Oregonians favor actual military involvement if a conflict would arise.

The Taxpayers Association of Oregon Foundation is currently in the field with a large straw poll asking Oregonians how they feel about U.S. policy towards Ukraine over a half dozen questions.  We will post the results when they come in.

Note: This poll is a straw poll, unscientific in limitations, but insightful on providing taxpayers a chance to express themselves on key issues facing the nation.