The office of Economic Analysis has released their Oregon forecast and government revenue is booming.

The forecast states that this unprecedented “The bottom line is that the unexpected revenue growth seen this year has left us with unprecedented balances this biennium, followed by a record kicker in 2023-25.  The projected personal kicker is $3.5 billion, which will be credited to taxpayers when they file their returns in Spring 2024. The projected corporate kicker is $1.1 billion, which will be retained for educational spending”

Part of the growth is due to the five trillion in recent federal spending lavished on state governments, businesses and taxpayers during the pandemic as well as the near-historic inflation that it has caused.  These budget numbers and tax revenue growth have surprised state forecasters and exceeded predictions. 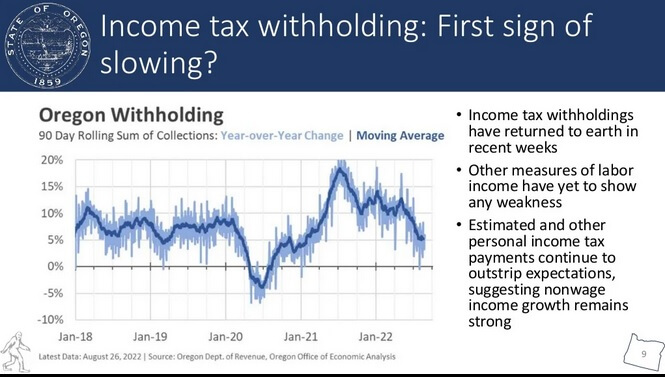 Fortunately, Oregon returns unexpected and over-collected tax revenue (beyond what lawmakers budgeted for) in the form of the kicker.  The kicker will return $3.5 billion to taxpayers.  Many politicians do not want to return any over-collected funds back to taxpayers but spend it now in the budget that is currently breaking records for size.   If politicians did this, it means the budget levels would be set so high that when a slowdown would occur (which forecasters say is happening right now as we speak) it would be impossible to maintain without jacking up more taxes.  State Government should be content with their record breaking budget size and they should honor the Constitutional Kicker law by return the over-collected funds back to taxpayers who need it to fight inflation.