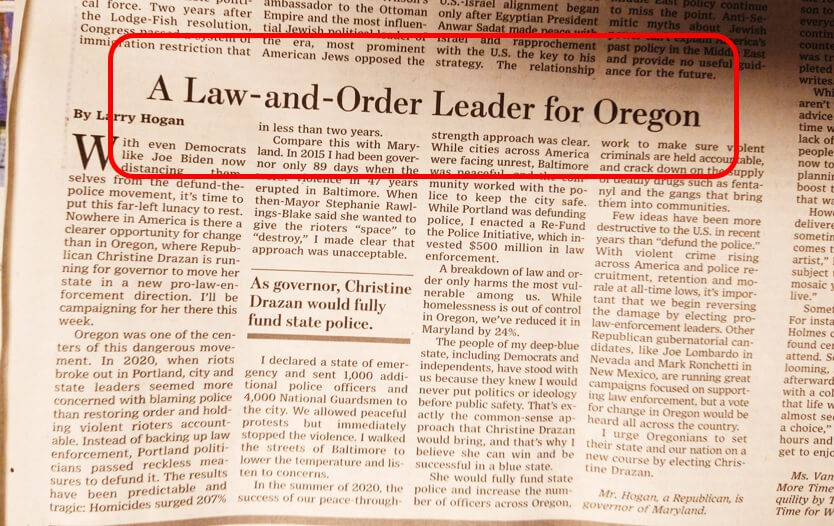 Maryland Governor Larry Hogan wrote a fascinating piece for the Wall Street Journal.  He explains that when violent riots hit Maryland, he responded with strong force while still protecting free-speech.  As a result, his state was spared the violence and marathon rioting impacting other states.   Governor Hogan then praises Oregon Governor Christine Drazan as the best choice for Oregon.  Here is his article.

“With even Democrats like Joe Biden now distancing themselves from the defund-the-police movement, it’s time to put this far-left lunacy to rest. Nowhere in America is there a clearer opportunity for change than in Oregon, where Republican Christine Drazan is running for governor to move her state in a new pro-law-enforcement direction. I’ll be campaigning for her there this week. Oregon was one of the centers of this dangerous movement. In 2020, when riots broke out in Portland, city and state leaders seemed more concerned with blaming police than restoring order and holding violent rioters accountable. Instead of backing up law enforcement, Portland politicians passed reckless measures to defund it. The results have been predictable and tragic: Homicides surged 207% in less than two years.

Compare this with Maryland. In 2015 I had been governor only 89 days when the worst violence in 47 years erupted in Baltimore. When then-Mayor Stephanie Rawlings-Blake said she wanted to give the rioters “space” to “destroy,” I made clear that approach was unacceptable. I declared a state of emergency and sent 1,000 additional police officers and 4,000 National Guardsmen to the city. We allowed peaceful protests but immediately stopped the violence. I walked the streets of Baltimore to lower the temperature and listen to concerns. In the summer of 2020, the success of our peace-through-strength approach was clear. While cities across America were facing unrest, Baltimore was peaceful, and the community worked with the police to keep the city safe. While Portland was defunding police, I enacted a Re-Fund the Police Initiative, which invested $500 million in law enforcement.

A breakdown of law and order only harms the most vulnerable among us. While homelessness is out of control in Oregon, we’ve reduced it in Maryland by 24%. The people of my deep-blue state, including Democrats and independents, have stood with us because they knew I would never put politics or ideology before public safety. That’s exactly the common-sense approach that Christine Drazan would bring, and that’s why I believe she can win and be successful in a blue state. She would fully fund state police and increase the number of officers across Oregon, work to make sure violent criminals are held accountable, and crack down on the supply of deadly drugs such as fentanyl and the gangs that bring them into communities.

Few ideas have been more destructive to the U.S. in recent years than “defund the police.” With violent crime rising across America and police recruitment, retention and morale at all-time lows, it’s important that we begin reversing the damage by electing pro-law-enforcement leaders. Other Republican gubernatorial candidates, like Joe Lombardo in Nevada and Mark Ronchetti in New Mexico, are running great campaigns focused on supporting law enforcement, but a vote for change in Oregon would be heard all across the country. I urge Oregonians to set their state and our nation on a new course by electing Christine Drazan.”