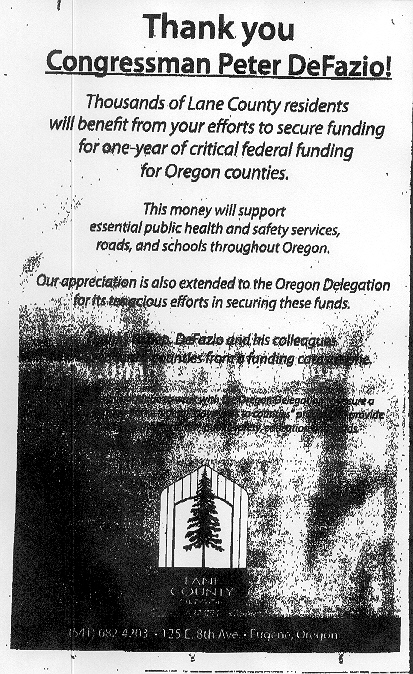 Lane County used tax dollars to place a huge ad in last Sunday’s Eugene Register Guard praising Congressman DeFazio. It is estimated the ad cost $1,000. Pardon the poor faxed copy, but you can see the Lane County logo at the bottom. Public outcry has caused the county to rethink the ad, and the funding may be switched retroactively. This all comes at a time when the county is laying of scores of workers and cutting services in response to budget cuts.

It is not enough that the County has the power to use tax dollars to pass public declarations, send personal letters, hold press conferences, travel to Washington D.C. to talk in person, or to write letters to the local newspapers praising Congressmen they love. The County now wants the power to do full scale advertising and promotion campaigns. Much like the estimated $40,000 of tax dollars they spent on half page newspaper and radio ads giving promotional views of the May income tax measure. The State Elections office criticized them on that last venture.