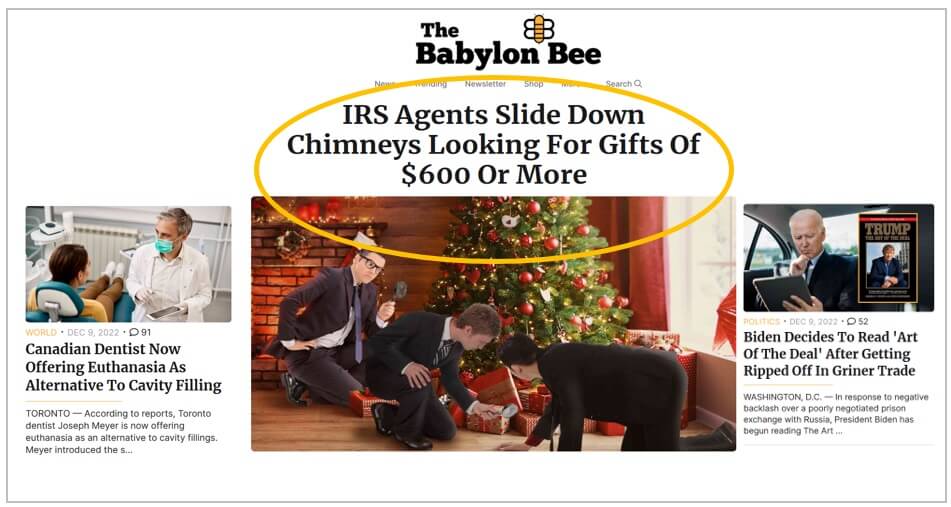 Hidden inside Biden’s 2021 American Rescue Plan Act was a new IRS provision that the mandatory reporting limit for alternative income is being lowered from $20,000 to $600.   That means taxpayers will have to start reporting cash gifts of $600 or more which may apply to the neighbor kid cutting your lawn for the whole year or you selling items in a garage sale.

WSJ Journal explains, “There’s a new job for those 87,000 new employees at the Internal Revenue Service, and it isn’t chasing billionaires. It’s digging around to discover if you reported that extra $600 you made from selling grandma’s heirlooms at your garage sale.The IRS is reminding Americans that the reporting rules have changed for payment-card and third-party payment network transactions. This means that if you received a payment of more than $600 via such networks as Venmo, PayPal, Amazon or Square, you will probably receive a Form 1099-K this year. The reporting limit for receiving a Form 1099-K used to be $20,000 a year. You can thank the 2021 American Rescue Plan Act, the $1.9 trillion spending blowout that did so much to spur inflation. Democrats unleashed the IRS to find the money to pay for this spending, and apparently their belief is that tens of millions of you are hiding income from your side hustle or selling old furniture.Americans are obliged to report all of their income, whether they receive a 1099 or not. But chasing after transactions as low as $600 means more hassle for you and millions of others, though we wonder how much money this effort will raise.”

The Babylon Bee made these satirical statements in their article, “Terrence Poole, Special Agent in Charge of Joy-Quashing, explained the agency’s actions, saying, “We understand that people get caught up in the spirit of the season and all that. But we want to be a constant reminder that celebrating the birth of the Savior of the universe is not more important than giving an account to the government for every single thing you have…Asked if the agents had faced any difficulties with their searches so far, Agent Poole said, “It was a little embarrassing one time when we ended up in Sam Bankman-Fried’s house. We just apologized and backed out slowly. I’m sure he’s got nothing important to declare.”