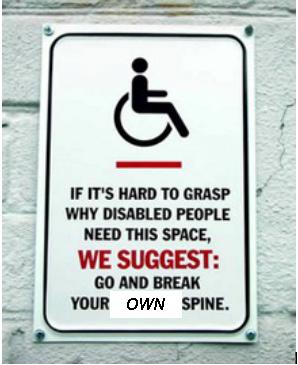 Are you one of the growing horde of cheats that blithely utilize handicap parking when you are neither handicapped nor have a handicapped person with you? Shame on you and shame on the doctors and bureaucrats that hand out handicap cards like they are aspirin.

The abuse of handicap parking is a significant problem and one that, in true bureaucratic fashion, the government attempts to manage through the imposition of new laws, stiffer fines and more rules but not, God forbid, the slightest bit of enforcement.

I have a nephew who is a quadriplegic as the result of an accident during his senior year in high school. Before you start feeling sorry for him, don’t. He doesn’t feel sorry for himself and he has treated his handicap as just another hurdle in life. He graduated from college with honors and then went on to pick up a master’s degree in finance and a law degree simultaneously. Despite being confined to a wheelchair with only limited movement in his wrists and biceps, he has learned to drive by utilizing a converted van with a modified steering apparatus. He is the type of person for whom the public accommodation laws, including handicapped parking, were enacted.

By virtue of state and federal law, now every parking lot available to the public contains a certain number of spaces for the handicapped. The locations of these spaces are required to be near the entrance to the building. Other accommodations such as ramps, accessible restrooms, and curb cuts have been mandated to open access to buildings and businesses for those who are truly handicapped.

But like every other good idea that lacks actual enforcement, the unchecked abuse of handicapped parking has become so routine and so widespread that the intended beneficiaries are often shut out from the use of these accommodations. There has been more than one occasion when our nephew has been late to a movie or a dinner with us because the handicap spaces were full and he had to park blocks away and motor precariously in his wheelchair to meet us.

So it makes my blood boil when I witness day after day people entering or exiting cars with handicap stickers that have no visible infirmities. And Tuesday was the final capper. I was at Costco and when I exited there was a huge three-quarter ton Ford F-150 parked in a handicap space. What caught my eye was this is one of those four-wheel drive monsters that you need a stepladder to get into the cab – not a likely scenario for a handicapped person. It was a huge rig with a full crew cab and at least an eight-foot bed. On top of the cab and bed was a welded steel frame on which two sea kayaks (you know the nine or ten foot models) were mounted. I’m six feet tall and I could barely reach the bottom of the kayaks. Its doubtful that a handicapped person could reach them either, let alone load or unload them from that height. About then a twenty-something blonde sprite who couldn’t have weighed a hundred pounds dripping wet bounced out of Costco and to the truck. As she opened the door to jump (and I mean literally jump) into the cap, I said, “You don’t look handicapped to me.” She replied dismissively, “I’m not, but Darryl is.” And then she jumped in and roared off. I haven’t any idea who Darryl is but he sure wasn’t in the truck and she certainly wasn’t entitled to use the handicap space or the handicap sticker.

And that accounts for the biggest group of those who abuse the handicap parking space with seeming impunity.

So I have some suggestions for returning a good idea to its original purpose and cutting the cheats off quickly.

1. Authorize a bounty for the stores and businesses to enforce the handicap restrictions.
2. Increase the fine ten-fold for using an authorized handicap sticker when the handicapped person is not present.
3. Authorize the use of store surveillance cameras as sufficient proof of an infraction.
4. Impose tighter restrictions on the issuance of handicap stickers. There is a difference between being voluntarily obese and having a medical condition that results in obesity. The former is sloth while the latter is a handicap. A good walk across the parking lot is probably the only exercise the former group will ever get.

Normally, this is the type of thing that I would favor a flogging in a public place for such miscreants but apparently that has gone out of vogue.