I am State Representative Dennis Richardson and I write this newsletter for Oregonians interested in what can be done to make Oregon a better place to live and work. This edition focuses on two subjects, the Rebalance of the current 2009-11 budget and selecting a reliable Revenue Forecast for the 2011-13 budget.

Rebalance. Oregon’s current 2009-11 State Budget, hopefully, has been backfilled with enough money for key programs to finish this biennium.  In last week’s newsletter I mentioned a potential shortfall of $163 million.  Fortunately, we will need to backfill “only” $77 million at this time.  The difference may or may not be needed, depending on various considerations, including the June 2011 Revenue Forecast (which will be released on May 12th).  Allocating $77 million to “Rebalance” the current budget will have consequences.  Every dollar spent to back-fill the current budget is a dollar not available for the 2011-13 budget.

2009-11 has not been a good biennium for Oregon. There has been a $1.1 Billion reduction in spending due to overly-optimistic revenue forecasts from the 2009 legislative session. Today’s $77 million backfill is required to maintain vital services and programs that would have been shut down by such a large reduction in their budgets so late in the biennium. (Click here.)

Why have Oregon’s tax revenues dropped so low?  Oregon’s General Fund revenue primarily comes from personal income taxes and, for more than ten years, Oregon’s unemployment rate has exceeded the national average.  For more than a year now, Oregon’s official unemployment rate has hovered around 10.6%.  When those who have accepted part-time jobs are added to the list, the number of Oregon workers who are either unemployed or underemployed climbs to 20%. 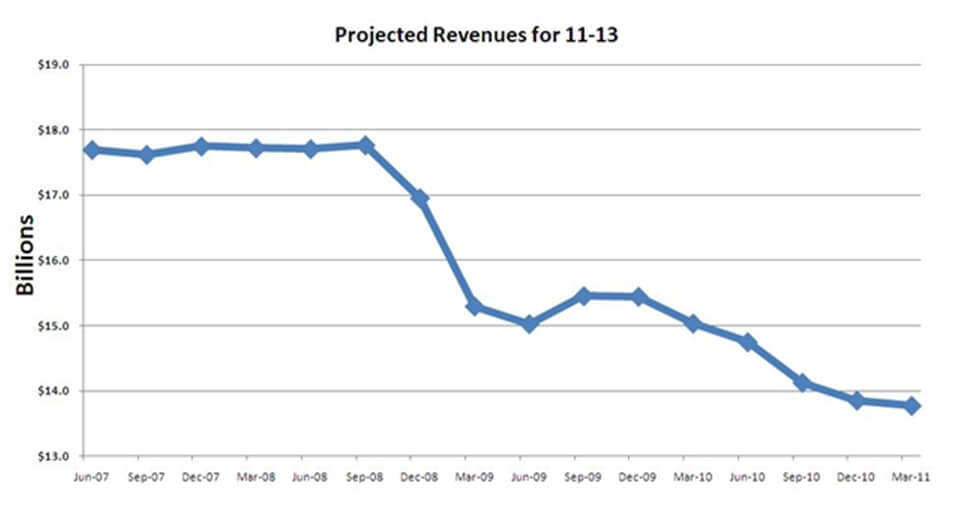 Why are these Quarterly Revenue Forecasts so important? To create a State Budget the Co-Chairs of Ways & Means must first agree on how much revenue the state can expect to receive during the next two-year budget period. From the graph of Quarterly Revenue Forecasts for 2011-13 above, we see that if last year’s March 2010 Forecast estimate for 2011-13’s revenue were used to set the revenue amount for the next two-year budget, it would have over-estimated expected revenues by nearly $1.3 billion more than the estimate contained in the March 2011 Forecast that was released last week.

Since Oregon’s Revenue Forecasts are vital to the budgeting process, and since 93% of Oregon’s revenues come from personal and corporate income taxes, let’s consider the State Economist’s history of forecasting Oregon’s employment recovery. 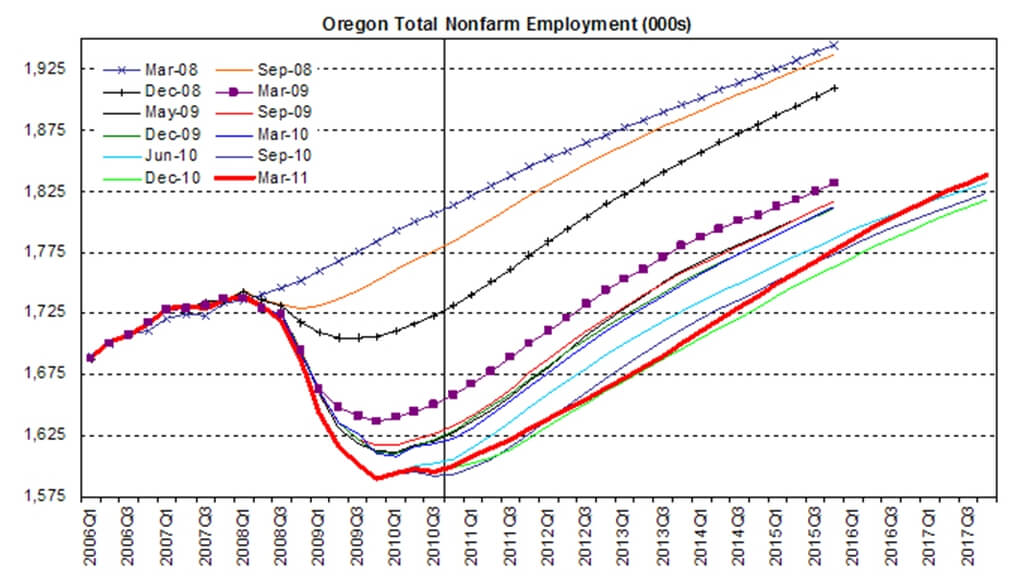 Every Quarterly Forecast for the past three years has opined a rapid and substantial recovery in the months that were to follow it.  Every forecast was consistently optimistic and each was consistently wrong.  Seeing the same 45% upswing after every forecast brings to mind the upbeat song from the 1930’s, “Happy Days Are Here Again.”  Unfortunately, singing the song with every forecast did not make it so.  Why should we assume last week’s forecast for an immediate strong recovery is any more reliable than the previous eleven Quarterly Revenue Forecasts?  (Note: The State Economist and his staff are highly trained and they use the best tools available to develop their Forecasts.  This newsletter is not a criticism of their work.  The problem we face is the inherent inaccuracy of forecasting; consequently, a revenue forecast fails to provide the reliability needed to create a stable State Budget.)

The challenge we now face is this: The Ways & Means Committee leaders must agree on a reasonable and rational revenue figure to use for determining how much can be spent during the 2011-13 biennium. If the right figure is selected, there will be enough money available to fund full school years for our students, to pay for health and human services programs for our most vulnerable citizens and to pay for prison costs and patrol officers to ensure public safety.

If we choose a revenue figure that is too high—as was the case for the 2009-11 State Budget, we invite another biennium of cuts and chaos for our agencies, programs and schools. The dilemma is real. Just in the three months since the December 2010 Forecast, the estimated General & Lottery Funds revenues have dropped by another $109 million. (Click here.)

Since so much depends on the selection of the right revenue amount to use for crafting the 2011-13 Budget, and since the State Quarterly Forecasts have been overly-optimistic by $4 billion in the past three years, I do not feel overly confident about using the most recent Revenue Forecast as the template for planning the State’s General Fund expenditures for the next two years.

In some states, the legislators are given a vote on which level or forecast should be used as the budget’s starting point. I will do the same thing here for 2011-13. Each of the Oregon’s 30 Senators and 60 State Representatives will be sent a survey, along with this newsletter and its links to the March 2011 Forecast (Click here.), and the Legislative Revenue Office’s LRO Forecast Summary (Click here.)

Here’s the information upon which the 2011-13 Revenue decision must be made. The March 2011 Revenue Forecast states the combined General and Lottery Funds’ revenues for 2011-13 will be $14.902 billion (down $109 million from the amount forecasted last December).

After adjustments we have a net revenue forecast of General Funds and Lottery Funds of $14.892 billion.

Historically, the Legislature merely accepts the most recent Revenue Forecast ($14.892 billion) and budget against it, assuming it to be reliable.  My question is this:  Do you believe we should use the standard Forecast number again for 2011-13 or should we budget against a different number—either a more optimistic or a more prudent revenue level?

In addition to asking this question of the 90 Oregon legislators, I am also asking for your opinion. (Please note, the revenue figure selected for budgeting purposes has nothing to do with the “Oregon Kicker.”)

What do you think the prudent level of revenue should be for 2011-13? Please remember the consequences we have suffered in the past as a result of the “Happy Days Are Here Again” syndrome. Should we stay with the State Economist’s most recent Revenue Forecast or should we increase or decrease it?

Since we all must live with the consequences of this important decision, please share your opinion. What you think is important to me. (To Take This One Question Survey, Click Here.)