It’s back! The Hamas children’s show “Tomorrow’s Pioneers” became famous for featuring a Mickey Mouse look-a-like who encouraged kids to fight Isreal and become martyrs. The show soon killed the character by having him being beaten to death by an Isreali border agent.

(This story is so twisted I had to post it) 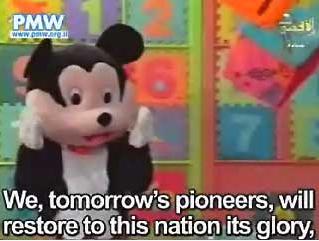