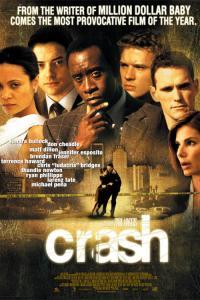 Did anyone see the movie Crash? It just won the SAG award for best performance by a cast in a motion picture, and it is now nominated for Best Picture at the Oscars.

What a silly heap of nonsense. Crash isn’t even derivative of Robert Altman flicks; it’s derivative of bad Robert Altman imitations. But even had it been a good derivation, with its multiple vignettes all coming together for a dramatically banal finish, the script felt like it was executed by a first-year film student. Like when the Iranian-American woman called the insurance company, only to find a rude, smoking pregnant lady answering her call in customer service. Try to come up with a more overused secondary character than that. Give me a break.

I sincerely, in my heart of hearts, don’t know how anyone took this movie seriously. And I’ve really begun to feel like I’m alone in the universe on this one: Peter Travers of Rolling Stone called it one of the years 10 best — but so did conservative critic Michael Medved, for crying out loud! It takes 1998’s overblown reverence for Good Will Hunting to an even more sickeningly grandiose level.

They really don’t get any more pretentious, or worse, than this. Save your money and, more importantly, your time. You’ll never get it back, nor be able to erase the bad memory which is this movie.