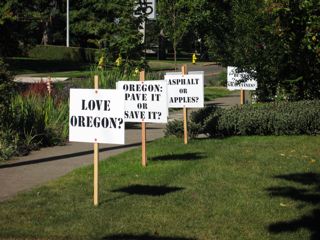 Rainy skies and crisp fall air. They’re a gentle reminder to me that campaign season is in full swing, as if the incessant TV ads would let you forget. But it isn’t the TV ads that captured my attention this year. It’s the lawn signs and specifically the messages on them that caught my eye.

“Love Oregon?” asks one. “Garbage dumps or grapes?” commands another. As if it’s either/or; any day now market forces be damned, someone’s going to buy out Sokol Blosser and dump trash right on top of their tasting room. An eight year old with some baseball cards and a Beckett’s Guide understands those economics don’t make sense. Supply and demand, anyone?
I’ll leave it to the pros to debate private property rights (I support “˜em), but there’s something about these words that isn’t right. Aside from the obvious need to put down the Joni Mitchell songbook while conjuring up these banal little gems, the contempt with which the message-writers hold their fellow Oregonians borders on the profane.

They seem to be saying that you can’t love Oregon unless you see things their way. In my vision of Oregon, we respect everybody’s opinion, especially those with whom we do not agree, and try to forge a fair compromise for everybody. Nobody is doing this very well, sadly, but that’s a topic for another day.

Taking a step back I can’t help but think that the “Love Oregon” types regret their arrogance just a bit, but my audacious hopes are dashed time and again. Remember, these are the same people who think nothing of ignoring voters who twice approved private property rights (M7 & M37). What was it that Einstein said about doing the same thing over and expecting different results? But hey, it worked for Christine, er Chris Gregoire. Just ask our friend Dino Rossi.

I’m reminded of a story from the 2002 election cycle. A nice car plastered with bumper stickers and signs for every liberal candidate and issue pulled up in front of my campaign office. I ran into the owner on my way out of the office and joked with her that she ought to have a Billy Dalto bumper sticker on her car, just for balance (save your comments about RINOs — I’ve heard them all).

She told me she would never support a Republican because all of them wanted to rape the environment. Really, I asked? All Republicans want to rape the environment? Well, 99% of them, she said. And another thing, she said, nobody should live in the country unless they absolutely need to? Did she need to, I asked? Well, I have horses, she said. So you must be a native Oregonian, I asked? Well, I’ve lived here for 30 years, was the reply. Exactly.

She’s entitled to her opinion so I’ll avoid veering off into a discussion about the intellectual dishonesty of people who’ve gotten theirs and don’t want anybody else to share the same opportunities (except when they want to sell out for big bucks). It’s important to note, though, that this comes from the spouse of a Marion County Planning Commissioner. Think he’s unbiased when it comes to land use decisions?

Few issues rile people more than property rights. People have strong opinions about this issue and it’s important that we work to find some common ground. Legislators were working on exactly that until the Democratic leadership capitulated to their supporters and decided to pack in the workgroup and put the issue on a ballot. Again.

How do I know? Their pollster called me earlier this year with a 50+ question survey that focused heavily on land use. Funny how the poll questions asked became Democratic talking points.

Let’s debate this issue. Let’s work something out. But please don’t suggest we can’t love Oregon if we don’t restrict private property rights. This nation and the American West has far too much history to suggest otherwise.