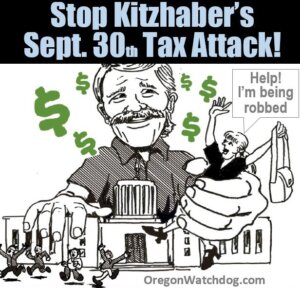 Kitzhaber announced his plans to call Oregon lawmakers into a Special Legislative Tax Session on Sept. 30th to raise nearly a quarter billion in new taxes!!!!

Kitzhaber also said at a town hall that we need to “put something on the ballot that either increases income tax, or statewide property tax or state sales tax.” (July 31, 2013, The Oregonian)

Kitzhaber’s “sales/income/property” tax plan could add $500 to 1,000 in higher taxes to your grocery bill or your property tax bill.

Why? Kitzhaber is desperate to help pay for the $14 billion bailout of the state government pension crisis.

Politicians raise our taxes to bail out their reckless spending. Despite a 17% increase in the education budget, Kitzhaber still told a Hood River audience of tax hungry politicians that he needs more tax money by saying, “The way to change it is put something on the ballot that either increases income tax, or adds either a statewide property tax or state sales tax.”

Kitzhaber’s tax threat is very real. Kitzhaber publicly testified in favor of a 5% sales tax just 5 months ago. In 2010, he supported the Income Tax increase (Measure 66). Please donate $250, $100 or $50 right away before any of these become law.