During the recent debate over the debt limit, President Obama advanced the notion of “shared sacrifice” to solve the budget deficit and national debt crises. This policy of modest budget cuts coupled with tax increases on high-income taxpayers failed in the debt cap negotiations. With the recent downgrade of Treasury securities by Standard & Poor’s, it is even more important that this policy be abandoned.

Significant stimulus of economic growth can only come from increasing the share of economic activity in high-productivity sectors. Using taxes to solve debt problems doubly saps growth. It diverts private resources from productive sectors to the large, low-productivity public sector. To get the growth rates we need, resources must be returned to the private sector –– not taken away and spent on projects selected by Washington.

The evidence on this point is strong, even if one ignores the obvious failure of recent stimulus spending. In 2009, Harvard economists Alesina and Ardagna examined about 90 fiscal reform efforts by major industrialized economies between 1970 and 2007. Their findings are an indictment of the use of public spending as a stimulus and the use of shared sacrifice policies in fiscal restructuring.

The adoption in the UK of a shared-sacrifice model offers some real-time evidence. Thus far, only 8 percent of the cutbacks involve losses of civil service posts, and there is little evidence of growth stimulus. Any potential stimulus created by spending austerity is weakened by the VAT, capital gains and bank tax increases in the UK plan. As a result, in June, the International Monetary Fund lowered its forecast of UK growth by 12 percent and warned Britain that it must cut taxes rather than relax the spending austerity aspects of its package.

Our administration continues to hope that, through shared sacrifice, cuts in federal spending can be modest because economic growth and tax revenues will eliminate our debt problems. Unfortunately, our ratio of national debt to gross domestic product (GDP) now exceeds 100 percent. My research and that of Checherita and Rother of the European Central Bank suggest that we will be fighting a strong economic undertow.

The reason is that the high debt load itself causes a chilling effect on growth, as the graphic suggests. Once above a debt-to-GDP ratio of 50 to 75 percent, potential growth slows and can be insufficient, by itself, to get back on the virtuous path of higher growth and declining debt. That leaves one option: to restore the prominence of private activity by sharply reducing federal spending. 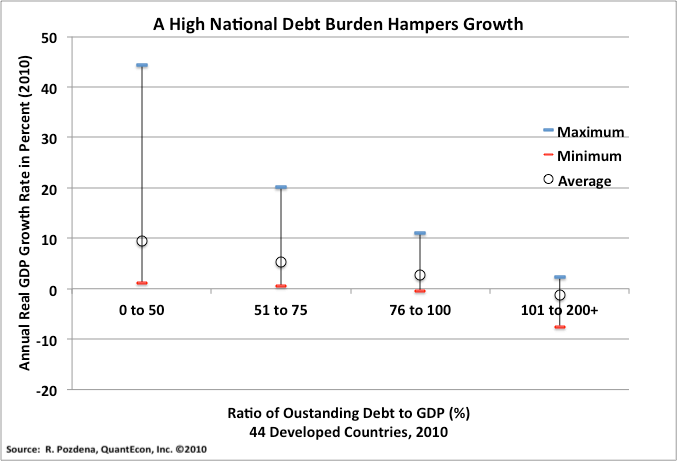 Randall Pozdena is a consulting economist in Portland, a former research officer in the Federal Reserve System and an Academic Advisor for Cascade Policy Institute, Oregon’s free market public policy research organization. The views expressed herein are his own.