For Veterans Day I would like to share with you a moment of battlefield courage by a US Marine that has never received recognition let alone a medal for an act of valor that has until now never been written about. This Marine was willing to sacrifice his life to save Golf Company 2nd Battalion 3rd Marines.

In 1966, Randy Shierman graduated from Benson High School here in Portland, Oregon. He did not sweat his draft number because he had already voluntarily enlisted in the Marine Corps instead. While waiting in a long line behind dozens of draftees at the Portland MEPS building he saw something being whispered down the line prompting people to desperately change their place in the queue. The message finally made it down to him saying that every fourth draftee has to go into the Marine Corps. It would only be a matter of months before this young man would learn why Marine Recruit Training is not for everybody. 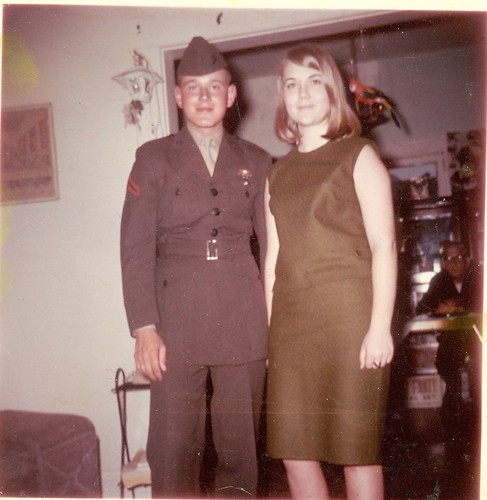 He proudly graduated boot camp, went to Radio School, and eventually shipped out to Vietnam. Upon checking in to Head Quarters and Service Company of Battalion Landing Team 2/3, it was decided that Lance Corporal Shierman’s school record, bearing, and native intelligence suggested he could handle the responsibility of being a Forward Air Controller (FAC) to be attached to a rifle company. Not long after getting settled into his new job, Vietnam erupted into the most intense fighting of the war which became known as the Tet Offensive. The Marines of I Corps in the north absorbed most of it.

After more than a month of intense fighting, towards the end of February 1968 while attached to Golf Company on an operation in Phu Bai, Lcpl Shierman was as exhausted as everyone else, but the responsibilities of a FAC were too great to allow fatigue to break his focus. Directing close air support was then and remains today an art not a science, where mistakes are deadly. While patrolling in a parallel column with Foxtrot Company, with about 50 meters of dense jungle between them, a small unit of Viet Cong ambushed both of them triggering an intramural firefight between the two Marine rifle companies as they simultaneously returned fire towards their center. As Lcpl Shierman was pinned down by Foxtrot Company’s machine gun fire impacting on the grass dome tomb in front of him, he heard his fellow FAC operator attached to the other company call in a helicopter gunship mission.

Above the noise and the chaos, Lcpl Shierman soon heard Golf Company Commander Lt. Schmaltz call out for his FAC to figure out what that gunship was doing. Lcpl Shierman first tried to contact his Foxtrot Company counterpart, Lcpl Ortega trying to identify what enemy position the gunship had been called on. Before he could get a clear answer, the screaming that followed the gunship’s fire told Lcpl Shierman exactly what was going on. Dodging Foxtrot Company’s fire, he rushed from the safety of his position to a clearing 30 meters away where Golf Company’s mortar section was being strafed by the Marine gunship.

As the gunship turned around to make another run Lcpl Shierman tried repeatedly and unsuccessfully to make contact with the pilot. This was Lcpl Shierman’s moment of decision. Pinned down by both enemy and friendly fire, Golf Company was about to be mowed down by their own air support. As the gunship approached again, Lcpl Shierman made himself an easy target by running out into the middle of the field in front of the mortar position. He waved a florescent air panel with one hand and held his radio handset with his other shouting and pleading at the pilot to cease fire – still no response. The gunship fired two rockets that sailed just over his shoulders, hitting the mortar team right behind him.

As the gunship came around for a third run, Lcpl Shierman was sure this was the end of his life but was prepared to stare it down again, wave his air panel, and shout more cuss words into his radio, but he finally got a response from the pilot. Skipping all formal procedures, he ordered the pilot to land immediately and evacuate the wounded Marines he just shot. The pilot apologized profusely claiming that the grunts were so sweaty, it looked like they were wearing black pajamas, the preferred uniform of the Viet Cong. Lcpl Shierman helped the most wounded Marine aboard. This Marine was desperately trying to put pressure on his own punctured carotid artery that was gushing blood to the rhythm of his beating heart. The Navy Corpsman Doc Quick did what he could for him, but the odds of his surviving the flight back to the rear were very low.

As Lcpl Shierman and HN Quick loaded this mortally wounded Marine aboard the helicopter, standing right next to them apologizing “I’m sorry, I’m sorry” was the pilot with his shiny captain’s bars twinkling under the bright Southeast Asian sun. Here is a picture of Lcpl Shierman just a few hours later that day. Does it look like he is wearing black pajamas to you? 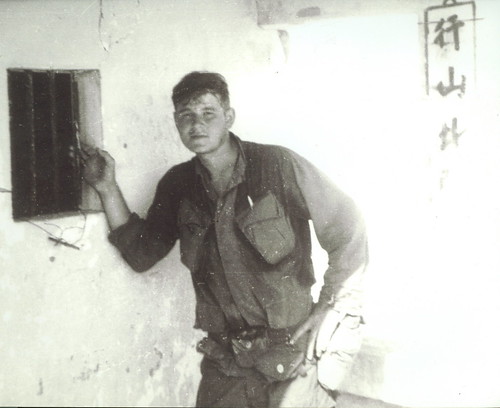 This is of course one of many unrecognized acts of valor made in 1968. The Tet Offensive is known as a great defeat. Politically it was a defeat, with generals and politicians having promised a cakewalk, the war suddenly got hard, and the American will to fight it faded quickly. Militarily however, it was one of the Marine Corps’ finest hours. With no intelligence warning, whole Viet Cong divisions tried to overrun outnumbered Marines in the north. When it was over the Viet Cong were annihilated, forcing North Vietnam to infiltrate whole units of NVA soldiers to the south for the remainder of the war because their once formidable guerrilla army had been completely slaughtered off from the disciplined defense of Marine rifle battalions like 2/3. In the case of Lcpl Shierman, there was an investigation, but like most friendly fire incidents, this was swept under the rug and any pending decoration along with it. 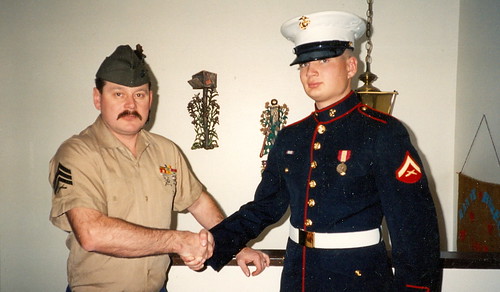 After completing his enlistment, Sergeant Shierman lived on to become my father, inspiring me to enlist in the Marine Corps as well. In the 1990s, my time in the Corps was marked by peace and prosperity. While the humanitarian and peacekeeping operations I was involved with did not rise to the level of the intensity of combat my dad saw, I still understand why his favorite Bible verse is John 15:13 “Greater love hath no man than this, that he lay down his life for his friends.”