Few people do. Right before Mitt Romney made his now famous point that people own corporations, he was challenged on the need to involve Social Security in current deficit cutting solutions because, as the heckler claimed, Social Security is not adding to the deficit.

Most people who watch this exchange assume the heckler was technically right. Most people believe Social Security continues to take in more revenue than it sends out. They know this will change some day, but their imagination assumes “some day” is a long time from now. The last estimate I remember paying attention to was made in 2007 which forecasted this positive cash flow to end in 2017. At the time I expected that forecast could have been overly optimistic as they always are, but I was never pessimistic enough to predict that Social Security would be in the red by 2009. Surprisingly it has been. Now, for FY2011, Social Security has added $151 billion to our deficit; FY2012 it will be $267 billion, and like Flintstones Kids it will keep growing. 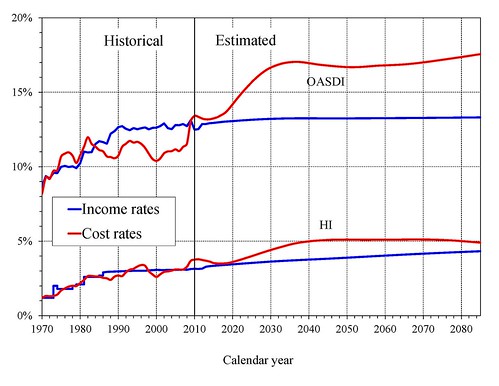 The future is here folks. We have been talking about this for years, but 2017 seemed so far away didn’t it? Now that Social Security has to tap into that $2.6 Trillion in Treasury Bonds that government accountants credit to its books, the date in which even this budgeting gimmick expires approaches us even sooner. The problem with these Treasuries, however, is that they are not in circulation. When the Social Security Administration needs to “sell” a bond it “owns”, the US Treasury holds an auction just like any other debt offering, increasing the total amount of US sovereign debt relative to our GDP. This is going to get really ugly really fast.