Back in April, public employee unions SEIU and AFSCME, along with a teacher’s union, OEA, put out a despicable and disingenuous attack ad. The attack ad targeted Republican Representative Dennis Richardson, one of three Co-Chairs of the Ways & Means Committee – the committee responsible for Oregon’s state budget. The other two co-chairs are Democrats, and were not targeted in the ad.

Rep. Richardson, along with his two Democratic Co-Chairs, had taken the very fiscally responsible stance that $460 million needed to be kept as a budget cushion (Ending Balance). One of the main reasons for the cushion was to protect school districts, teachers and state services from the jarring budget cuts that we’ve seen as a result of three years of mostly WRONG quarterly revenue forecasts.

In an attempt to coerce the legislators into spending every dime of the forecast revenue, the three public unions put out the attack ad criticizing Rep. Richardson for trying to cushion schools & state services from future wrong revenue forecasts.

The attack ad was filled with deceit. It attempted to portray the budget from a Democratic Governor (who they were major contributors to), that was being moved along by two Democratic Co-Chairs and one Republican Co-Chair, as a Republican plan. They pretended that Rep. Richardson as one of three Co-Chairs was the only chair, AND they falsely said that the then “$440 million” were “for HIS [Rep. Richardson] political priorities”.

Now those public unions are looking dumber and dumber, and Representative Dennis Richardson, along with his two Democratic Co-Chairs, are looking smarter and smarter.

This week’s revenue forecast showed a further $110 million decrease from last quarter’s, for a total decrease of $306 million since the close of the legislative session in June. That’s $306 million in just the first two quarters. There are eight quarters in the current two-year (biennium) budget cycle, and just 1/4th of the way into the budget cycle, 2/3rds of the cushion has already been wiped out by plummeting revenue forecasts. 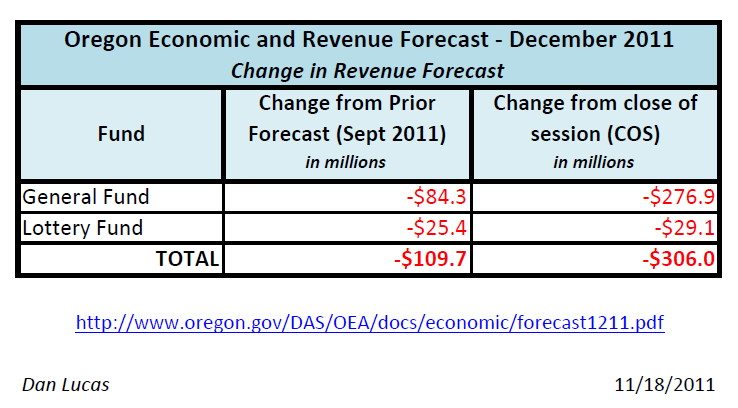 Had the legislature given into the public union’s attempted coercion, schools and state services would already be facing additional, painful cuts. Oregonians owe a debt of gratitude to Representative Dennis Richardson, who alone bore the pressure and deceitful attacks from the public unions.

To read more reactions on this week’s quarterly Oregon Economic and Revenue Forecast:

Rep. Richardson’s Newsletter – November 17, 2011
“The anticipated state revenue from the General and Lottery Funds has been readjusted downward by another $107 million.”

Senate Republicans comment on revenue forecast
“Thursday’s revenue forecast predicted another $107 million reduction in receipts for state government, for a total 2011-13 deficit of just over $300 million.”

Statement from Co-Speaker Bruce Hanna on Latest State Revenue Forecast
“Total anticipated general and lottery fund resources for the 2011-2013 biennium are now $306 million less than expected at the close of the 2011 legislative session.”

The Oregonian Editorial Board – Let’s hear it for prudent budgeting
“Dennis Richardson was right. The Central Point Republican who insisted on a state budget reserve of more than $450 million and was ripped for his stance in television ads paid for by public employee unions now looks absolutely prescient.”