On this Thanksgiving, we all have many things to be thankful for in our private lives. Despite the endless flow of bad news out there, we have a lot to be thankful for in our public policy lives as well. Despite the hyperbole of political rhetoric, we can be thankful that Barack Obama is not a real socialist like Hugo Chavez. Despite our super committee’s failure to reach a debt reducing deal, we can be thankful that the yield on ten year Treasuries remains 3%, having not shot up to 7% as it has for France, Spain, and Italy. Since none of these things are guaranteed to be permanent, I would like to focus your thankfulness on something constant like Say’s Law.

Jean Baptist Say was a French economist that identified how any supply of a commodity could sell so long as prices are allowed to adjust. While he did reserve for the possibility that one commodity could be so overproduced relative to all other commodities that a price of zero would not deplete inventories, his law explains why this cannot happen on a systemic level. Thanksgiving being such a food orientated holiday, I would like to use something edible to demonstrate this law in action by showing the relationship of McDonald’s McRib sales and pork prices.

McDonald’s being such an effective force in marketing, it would be natural to assume this is purely a sales gimmick like Disney bringing its back-listed movies in and out of theaters, but there is an unmistakable role that the price of pork has in McDonald’s timing of the return of the McRib to its menus, and there is an unmistakable role McDonald’s decision has on pork prices. Here is the data for pork prices over the last decade and the previous five times McDonald’s sold the McRib. 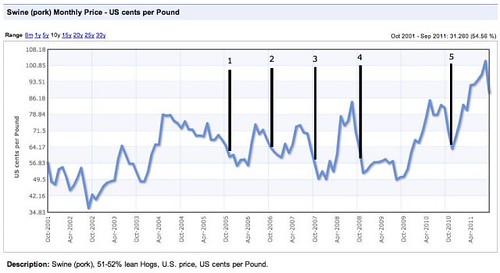 McDonald’s clearly waits until the price of pork drops to a point that guarantees its promotion will be profitable. McDonald’s purchases then cause a recovery in pork prices. This is a microeconomic example of something happening simultaneously to all the other goods and services available in an economy as the dynamic complexity of aggregate demand works itself out.

There is a fundamental asymmetry between inflation and deflation as macroeconomic phenomenon. A little inflation gradually threatens to compound into a lot of inflation as wages chase prices, savers stop being suckers, and consumers accelerate their purchases to save money from expected higher future prices. There is no ceiling to contain hyperinflation, but Say’s Law shows how there is a natural floor to prevent hyperdeflation. There is a price point for every commodity that triggers a market clearing sale. 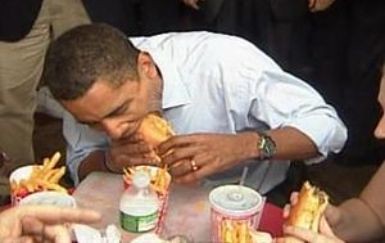 Politicians, many of whom love the McRib as much as the next guy, tout the threat of perpetual deflation to justify the patronage spending of stimulus packages, agricultural subsidies, and moratoriums on foreclosures. In their attempt to prop up prices to avoid the temporary pain of deflation, politicians prevent markets from reaching their clearing prices, prolonging the pain.

The fact that it does not have to be this way is something we all can be thankful for.