In the special election primary to replace David Wu, Democrat Suzanne Bonamici won the Independent Party of Oregon’s nomination with 56 votes out of a total of 87 votes cast. Republican Rob Cornilles received 31 votes. Under an Oregon law that allows “fusion voting”, Bonamici will now be able to use both Independent and Democrat on the ballot in January.

The Independent Party of Oregon has 13,546 voters in Oregon’s First Congressional District (CD-1); 3.2% of all the voters in CD-1. 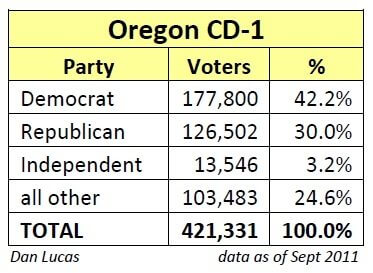 KATU provided the Independent Party of Oregon’s explanation for the extremely low voter turnout from party secretary Sal Peralta: “We knew it would be tough for the candidates to turn out the voters for a one-office special election, particularly when voters were required to go to a website, download a ballot, and return it with ID.”

In the survey that Rob Cornilles filled out for the IPO, he made his case to Independent Party voters “we need to stop sending partisan button-pushers to Congress. I intend to represent the people, not a party.” His comment on partisan button-pushers was a reference to his opponent’s voting record. Data from The Oregonian reveals that Suzanne Bonamici voted along party lines 98.3% of the time in the State Senate.