In a follow up to a previous article where I outlined Ron Suskind’s account of the making of Obamacare, there is also a passage in his book Confidence Men with an interesting Oregon connection that just leaps off the page. Suskind is interviewing Dr. James Weinstein of Dartmouth University who was the intellectual father in many ways to what Obamacare was initially supposed to be. Weinstein’s academic research has studied the regional variations in health outcomes relative to medical procedures that were common practice. He found what any economist might expect: a diminished marginal return in health outcomes in regions that commonly employ more frequent and expensive procedures.

The most cited of Weinstein’s studies regards lumbar spine surgery to treat back pain, but when asked by Suskind where the greatest healthcare savings were to be found, he gave this remarkable answer:

But then he smiled, thinking of Oregon. This was something that always gave him a lift, something he discovered a few years ago that surprised him. Oregon was the first state to pass a “Death with Dignity Act,” in 1994, allowing for physician-assisted suicides in certain limited cases. Since then, the law had been repealed and reinstated, challenged and, ultimately, affirmed in a 2006 Supreme Court ruling.

Nearly 30 percent of Medicare costs are spent on end-of-life care, a stunning figure considering that most beneficiaries arrive into Medicare at sixty-five and the average life expectancy is seventy-nine. In the last year of life, covered medical costs average nearly $30,000.

Weinstein then points out to Suskind a very intuitive fact that perhaps few people have taken into consideration:

The result: Medicare costs in Oregon are some of the lowest in the country. And it’s largely because of reduced end-of-life costs. “They learned what the doctors didn’t want to tell them,” Jim Weinstein said with a chuckle. “That in medicine less is often more. And you – patients – are in charge, right until the end.”

There is of course a huge disconnect between what it means today to have patients in charge and what it would have meant if Obamacare ended up looking more the way Weinstein envisioned it. In a world where data driven boards make rational return-on-investment decisions on end-of-life medical options, expensive new treatments that allow a 75 year old to live another four years with little pain could easily get rejected in favor of two other options: cheaper but painfully torturous procedures or the cheapest procedure of all, suicide.

In rebutting what it deemed to be a mere populist myth, that Obamacare was setting up death panels, the Obama administration thought it was enough to show that its law would not MANDATE suicide or even the pulling of tubes, but that is a low bar to set. This is very similar to the Roosevelt administration’s rejection of the charge that the Social Security number would never become a national ID number, because the Social Security Act did not mandate its use outside of administering what was then a mere old age pension.

Obamacare very deliberately set in motion the institutional creation of death panel infrastructure that will become necessary when the expansion of access this law has mandated continues to accelerate the price inflation of health care services in what would otherwise have been a deflationary environment. The Obama administration did so with their most touted independent expert promoting the Oregon way of bending the cost curve.

Let’s remember that death panels and the other applications of these medical review boards that Obamacare set up, are a form of rationing. Somehow rationing has become a bad word. Rationing is what we do every day in the grocery store. Most of our problems in healthcare costs come from government efforts to prevent rationing through direct subsidies and regulatory mandates. If elderly people were rationally allocating their own family’s assets for their own care, they would no doubt display a far greater degree of frugality than a Medicare system that replaces the hips of folks in their late 90s and gives them an electric scooter too.

For anyone with a basic grasp of economics, this is not hard to fathom. Indeed it’s so easy kids could make a rap video about it.

A free-market healthcare sector undistorted by government policy would provide a more efficient means of rationing. Government rationing can limit the consumption of medical services by directing consumers to approved procedures but cannot much affect their prices. The more efficient rationing of free-market agents can do both, meaning that over time less rationing would need to occur.

Probably the best healthcare policy expert who can lucidly explain how to craft reforms that enjoy the benefits of market rationing while retaining some government intervention to promote access to care lives here in Oregon. The most informative book I have ever read on this subject was Dr. Douglas Perednia’s Overhauling America’s Healthcare Machine. 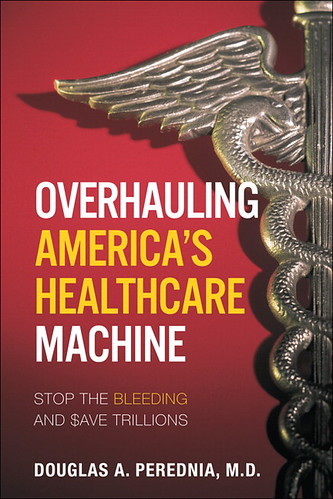 Besides being a medical doctor himself, probably the best thing Perednia brings to the policy discussion is a serious grasp of economics to compliment that first-hand experience of his as a physician. Few healthcare policy “experts” have either. I am a regular reader of his excellent blog, The Road to Hellth  and highly recommend it to any of you who want to follow the details on this issue. He has also written for the Oregon Catalyst.

I give Obamacare only a 50% chance of being overturned by the Supreme Court. Many of you would no doubt rejoice in that, but the status quo that preceded it is not to be embraced either. To intelligently hold a national debate on how to move forward, opposing the progressives’ reform agenda will not be enough. You have to be willing to delve into the details to offer a positive alternative. A close read of Perednia’s book, (only $12.38 on kindle) is probably the best first step.