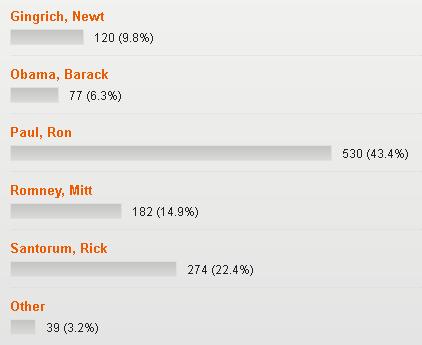 Results of the Taxpayer Association Straw Poll
Over 1,248 people responded!
— Over 50 comments

1) If the Presidential election were held today which candidate would you vote for?

2) Should statewide Democrat & Republican primaries be open to non-affiliated voters? 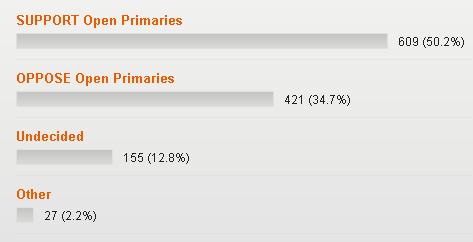 Comments
-I believe if people look more into principles, rather than the party; we’d be more fiscally moral.
-Should Rotarians say who should head the Kiwanas?
-Primaries should be banned. A big taxpayer expense.
-Only the Caucus system benefits the political landscape.
-should be the state party’s choice, and should be voted on within the party.
– I think we should consider the Washington State style because it would allow us to have a general election with the top two candidates and get third partys out of the way
-Horrible Idea
-It should be allowed if a party agrees to it. Political parties should remain private institutions that can make the choice.
-Can you trust the other party to tell you whats best for your party?
-if both are open to others-Cross-over voters will sway elections
-I am registered as republican but vote across party lines.
-It’s a Republican thing/dumicratic thing
-open prims would help opposing sides torpedo a particular candidate
-Really don’t see this as a burning issue
-If someone really wants to vote in a primary, they should know before the election, and can register with that party. They can always change back.
-Keep Closed Primary System
-If top 2 go on to general election, third parties will be dead in 5 years.
-best hope of Republican party to run winners
-why should a non affiliate be able to choose MY parties nominie? You want to have a say. register with a party
-Should be up to each party and for which offices. This is current law.
-Open allows our complete freedom of voting.
-Voter Fraud by Mail already creates false outcomes. We don’t need democrats and union minions messing up the Republican Primary too.
-Open primaries bring in Independents
-Only way to save the GOP
3) Should there be a ban against protesting near a funeral? Free speech rights vs. right to privacy.

-We can pay our respects, but express with dignity

-No but communities can work something out locally and prevent such protests by other means.

-One would hope that good sense and decency would prevail in these circumstances. However no one has a right to privacy out in public, not even at a funeral.

-Out of respect, not because the government says so.

-That is what Freedom is… even if we don’t agree with it.

-It is disrespectful, but protected by the First Amendment

-If you let the funeral goers have the freedom to do want about the protesters you wouldn’t need to pass any law.

-It’s private property, but there’s no need for a specific law.

-Roads/sidewalks should be privatized so that the owners of the property can decide if protesting can take place on there.

-However distasteful I have to say a loud and resounding NO

-If it’s on private property, yes.

-Yes, allow the family to greive at graveside

-If the funeral is on private property it is a matter of property rights and should be enforced as such. If it is on public property free speech privales.

-The owners of the cemetery should be able to have them removed from their property, by force if necessary.

-no, but don’t be surprised if somebody shows that they don’t like it….

-Free speech is for all citizens, no banning is wrong for that is telling people what they can do and can’t do and that is wrong. Remember the Constitution and the Bill of Rights, thanks.

-but common sense and respect for others is needed

-Not to end free speech rights, but to give a certain amount of space out of respect for the family.

-Yes, kind of like a disturbing the peace law or drunk and disorderly. Shouldn’t be a free speech limiter

-‘Near’ is a relative term. How about 200 ft from funeral participants.

-Too many laws already, including laws which cover this. Enforce the laws we have.

-If you ban free speech for others, you will lose it to. Come up with free speech ways to over come the effects of protests. I saw a Youtube even where a motorcycle club surrounded a funeral playing patriotic music loud enough to overcome protesters. DON’T restrict free speech. Use your brain and be smarter than resorting to force (which in turn can be used to shut you up so tight you’d regret you ever shut others up). Remember what the constitution and bill of rights are for when it comes to free speech: you don’t need a law to restrict speech everyone like. Therefore the laws are there for things we find offensive. If not there for that, then it is there for nothing. So, it’s there for funeral protests, or nothing at all.

-and be put in jail

-No ban, but reasonable noise restrictions

-I do not believe there is a right to privacy law. But I think you should be able to have the protesters stand far enough back to voice their ideas but not close enough to matter.

-It infringes upon privacy during a time of sorrow.

-Funerals are private, not public matters

-Which one was planned first?

-NO, as long as the funeral is not disrupted. You’ve a right to protest, I don’t have a right to feel good. (I also support groups like PGR who keep the protesters from disrupting the funeral.)

-There are laws preventing harassment. that should be enough

-/They are infringing upon others right to peaceful assembly

-What those people do is NOT free speech.

-I would hope that idiots like this would not be out protesting and making a mockery of some brave soul’s last rites but free speech is also an issue here that needs to be recognized.

-This is not free speech, it is harrassment in the worst possible way.

-Yes. Funerals are for the bereaved to honor their deceased loved one.

-Those mourning have the right to do so in privacy