Two weeks ago last Thursday my phone rang. It was just about 8 PM. On the other end was Andrew Breitbart. He got straight to the point. “Can you be here by 10 AM tomorrow? I want to put you in my documentary. It’s the last day of production.”  What a day it had been: While I was out, without a word, my boyfriend of seven months had packed his stuff and left. “Hell, yeah,” I said. “I’ll be on the first plane down in the morning.”

By 11 AM Friday I was sipping coffee at a Starbuck’s near Andrew’s studio in L.A. with a group of other video journalists. Within five minutes of joining them I had forgotten all about my personal problems back in Portland. Andrew has a way of drawing you in and “holding court” as my good friend, Jeff Reynolds, put it. His world became your world and what a world it was. His energy was indefatigable, and combined with his sense of irony and encyclopedic knowledge of Liberal Revisionist History, it was impossible to look away. Andrew was a one-man wrecking ball against creeping socialism, and for that very reason, was hated and scorned by the Left. But to a conservative citizen journalist such as myself, Breitbart was an inspiration.

Back in 2010, having retired early as an engineer, I found myself searching for a way to help combat the rise of Marxism in the U.S. I was alarmed by the unilateral socialist polices of Barack Obama. In June of that year, I was watching a YouTube video of a GOP Southern Conference when some crazy-haired guy called “Breitbart” took the stage and aimed a flamethrower at the Left. I recall saying to myself,  “Who is this guy?!” Then, just as the thought crossed my mind, Breitbart peered straight into the camera and directly into my soul. “Pick up a camera and point it at someone,” he said. “The old media is dead. You are the new media.” By the end of that week I found myself at Grant High School snapping pictures of Jefferson Smith’s Bus Project, which was making its weekly indoctrination run.

Later that year I had the opportunity to meet James O’Keefe, who also glowed about Andrew. James related how he and his cohort Hannah Giles with Breitbart providing the platform, had dismantled the multi-billion-dollar voter-fraud machine that was ACORN. James approached Andrew with live ordinance. Having ditched the Huffington Post and founding his blockbuster new site, Breitbart.com, Andrew provided James a bazooka with which to fire it. I could see the model. By that fall I had my own story to tell. Two Leftist goons had assaulted me for refusing to stop filming during a Kitzhaber rally. I YouTube’d the result (thankfully my friend had kept rolling as well) and Breitbart did what Breitbart did best: he recognized news when he saw it, ran with it, and the story went viral.

Then came the TEA Party of 2011. Here in “tolerant” Portland, an enraged gang organized by Marxists on the PSU campus and a Democratic Party operative attacked us, a textbook example of the angry mobs described by Ann Coulter. Though not through any formal type of arrangement or some special privilege, Breitbart continued to run with our stuff. We emailed and tweeted; Andrew looked, saw news, and published. In this way Breitbart generated amazing impact. Leftist thugs had shrieked racial slurs at Blacks in the TEA Party. They called me, as well as other gays in the TEA Party, “F-ing homos.” This was news, and Andrew recognized it. Meanwhile, local Leftist “journalists” like Mapes at the Oregonian and Theriault at the Mercury looked the other way, appearing more and more like the shills they are. Again, to the chagrin of local Liberals, our TEA Party story went viral, on a national level, with Breitbart an unapologetic genius.

As summer drifted into fall, Breitbart continued with our stories: An Occupier told a TEA Party mom:  “hopefully you get hit in the head with a tear gas canister.” Breitbart covered. Another Occupier attacked a KGW news crew. Our cameras were there; Breitbart covered. The local Liberal schools began taking field trips down to Occupy. Broadcast on a national level, Andrew picked up story after story, allowing us to bypass the Leftist media and report straight to the people, as the founding Fathers had intended. Social media allowed us to rub Mayor Sam Adams’ nose in it until he could no longer ignore the festering boil he had facilitated. Finally he capitulated, due in no small part to the national coverage afforded us by Andrew Breitbart.

Fast forward to the L.A. movie: I appear before the cameras, hair unkempt, beard untrimmed, shirt unpressed, and looking in general like the poor night’s sleep and flight I’d endured getting down there. But Andrew, in a word, was magnanimous. As he watched me being interviewed under the bright lights, he chuckled and quipped loudly, “I’ve created a movie star!” I broke away, asking for a picture with him. He gladly accommodated, sitting astride his new silver Vespa. He’d opted for alternative transportation, he explained, to get around the L.A. traffic so that he could spend more time with his family. 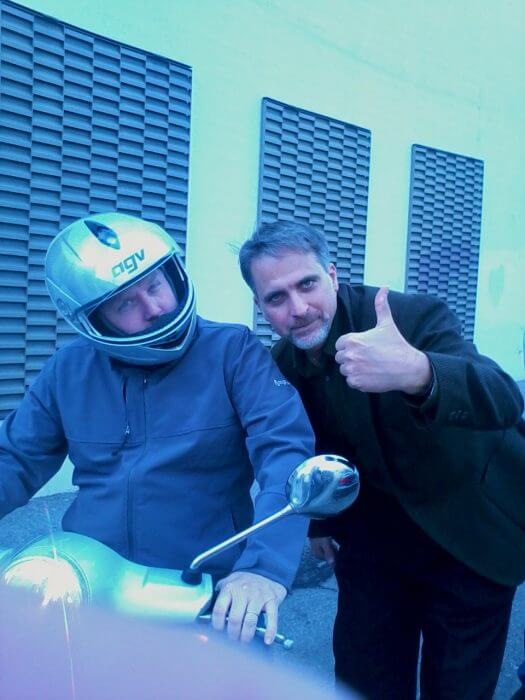 During an important moment in production, Andrew broke away to gather up his young son who was having a cast removed. When he returned later, his son in tow, it was obvious what a loving father and all-around good guy he was. CNBC and the Liberal Left had begun to disavow themselves of the numerous rapes committed down at Occupy. But Andrew wasn’t about to let them get away with it. While his son flew paper airplanes off the balcony of the Breitbart office space, he plunked himself down to engage in a twitter war.

As I returned to Portland, at the end of a long, exhausting day, we made a promise to one another: We’d spend more time together next time I visited. His good friend and editor, Larry O’Connor, busily at work on a new version of BREITBART.COM, thanked me sincerely and profusely for the contributions made by all of Portland. Our city, it seems, has gained a reputation for being a crucible for Citizen Journalism.

Since returning, I’ve been gathering and providing content from my archives to Breitbart’s film producers. Thursday’s news came as an indescribable shock to me. They’ll be no replacing Andrew or curing the sadness in my soul. My friendship with Andrew was brief, but I felt with him a kindred spirit. He seemed to know intuitively what contributions I had made, and the price I had paid at the hands of the Left. He offered me not sympathy, but a model of how to behave: unapologetic, consistently on offense, and relentless in pursuit of the truth.

About the Author
Inspired by Andrew Beitbart and James O’Keefe, Dan Sandini is an independent citizen journalist working out of Portland, Oregon. He is a staunch advocate of the First Amendment. In 2010 he was assaulted by Democrat thugs for having the temerity to record a speech by then gubernatorial candidate John Kitzhaber. He produced a video of the Orwellian experience, which has received almost 70,000 views.  Following the 2011 Tax Day TEA Party he produced videos detailing the hateful rhetoric and behavior of the Left, including homophobia, racism, anti-Americanism, and threats of violence. These videos have been seen by over 1 Million people and were featured on The Glenn Beck Program,The O’Reilly Factor, and Sean Hannity.