Those old enough will remember what urban renewal was intended to be. It was meant to take blighted urban areas and make them pretty again, to instill pride, increase commerce and reduce crime using tax dollars. 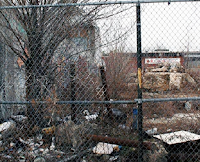 This is blight in Portland

Now what is urban renewal? Well, as we found out yesterday in this post about Portland’s seven proposed urban renewal area ideas, we don’t need no stinkin’ blight. In fact, we won’t leave the blight on for ya!

Take the latest idea from the Portland Professional Planners Class to create an entire “education” urban renewal area (URA). Now you may think Portland’s education is blighted -heh-  but this isn’t what we’re talking about. Nope. Portland Planners just made up the idea of an “education” area as a pretext to go in and do stuff they wanted to do anyway and didn’t get the funding for from the local voters, state legislature or the feds. (More on that tomorrow) 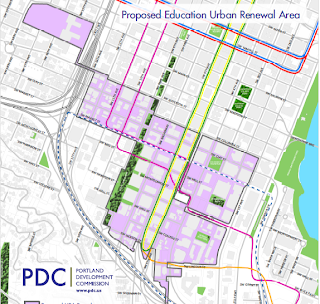 You’d think that if it were genuine planning for education that officials would bring the needs to voters or the Ed board, right?  But they don’t want voter input. That’s why they make this stuff up so they can sidestep the voters while taking their money. In fact, that’s why Multnomah County Chair, Jeff Cogen, called this a “radical” use of urban renewal.

This blighted “education” URA contains the bubble around Portland State University to… wait a minute, what is that up in the NW corner of that map? 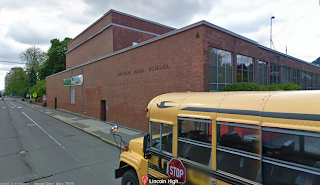 What’s wrong with Lincoln High School? Nothing. Well save for some maintenance issues the Portland Public School District wanted to bond out for a half a billion dollars in the last election.

Gosh, do you suppose that Lincoln High School, the PPS folks and Portland Mayor Sam Adams –who fancies himself the education mayor–conspired to include LHS in this phony URA to get the maintenance done on the school that voters said ‘no’ to the last time? See my posts on the scam proposed by education officials here, here, here,  here, among many others. 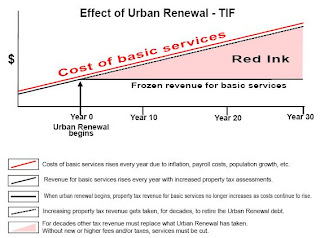 Now, mind you, URA money comes from skimming off any additional property tax revenue in the area and diverting that money from its usual use–public safety (roads, police, fire) and schools and compiling a pot of money to finance the desired improvements. Ironic then, that schools would sign on to an urban renewal area that guarantees depriving them of additional money. Ironic unless they are promised a cut of the action.

Urban renewal now is a tool to steal –yes, steal–taxpayer money to impose the will of the planner class all in the name of “good intentions” while leaving the voters out of the mix.

As an added benefit, it gives these bureaucrats control of millions of dollars to pay off potential foes and give favors to friends such as developers like Homer Williams and Portland Public Schools?

That’s why this is called, “Cash for Cronies”

Property rights, freedom from government over-regulation, public safety and pride of building your own business are what we give up to these planners. They’re the opportunity costs of these URA’s.

Screwing the voters out of a say in the whole matter is just an added bonus to them.

And it’s too high a price to pay.