The amount of taxes that need to be raised to balance our budget without touching entitlement spending is so enormous, Democrats prefer to talk about it rather than vote for it.

In case you missed it due to all the overwhelming Supreme Court coverage of late, votes have now been cast for Bowles Simpson, Paul Ryan’s budget, and the president’s budget. While last year, the president’s budget was allowed to proceed in the senate to a 97-0 failure, the Democratic leadership will not allow any of these bills to come up for a vote this year. In contrast, the house Republican leadership has allowed all three to get a vote. Here’s the score. Only one member of Oregon’s congressional delegation voted for Bowles Simpson which was defeated 382-38, and for that yea vote I think Kurt Schrader deserves a lot of credit. The Ryan budget passed 228-191 in the house with Greg Walden casting the only Oregon vote for it. In true bi-partisan fashion, every member of Oregon’s congressional delegation voted against the president’s budget which was defeated 414-0.

A major theme emerging from the Democratic message machine tries to convey the image of a reasonable senate and a reasonable president getting blocked at every turn by obstructionist Republicans in the house, a message at stark variance with the fact that these same Democrats gave up budgeting more than two years ago. Today they snicker at the house Republicans’ earnest eagerness to actually stake out a position and take the tough vote.

Senate rules prevent the filibustering of a budget, yet its Democratic leadership has had no interest in passing its own that raises taxes rather than cuts spending. The president’s budget contained a handful of focus group approved tax increases that generated more symbolism than revenue. The amount of taxes that need to be raised to balance our budget without touching entitlement spending is so enormous, Democrats prefer to talk about it rather than vote for it. Only in a stump speech will it mean taxing only millionaires, but real bills require real numbers.

The Democrats’ strategy has been to not vote for anything. They even voted against the president’s budget proposal because a vote for it could cost them politically as a vote for fiscal irresponsibility. The CBO which has been very deferential to Obama scored his budget assuming 4% GDP growth and even under that rosy scenario, it still commits us to debt levels unthinkable even a year ago. 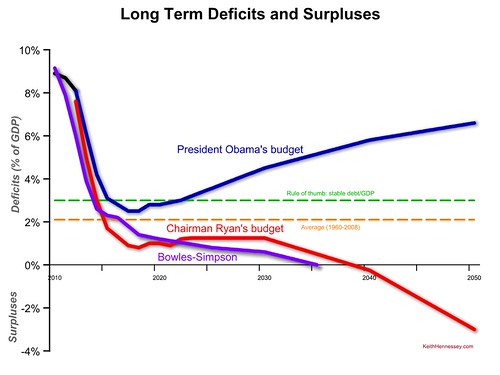 The only thing that would get the president and senate Democrats to stop campaigning for a moment and manage our finances a little was the need for an expansion of our debt limit last year. One interesting indication of how bad our fiscal position has eroded in just the last six months is the disturbing fact that the new limit of $16.4 trillion dollars that Obama insisted upon so that he would not have to face another debt ceiling vote before his reelection might not be high enough to get us there. This past February, the US unexpectedly ran its single largest monthly deficit ever and Obama’s ability to postpone another debt ceiling fight until after the election now depends on how much revenue is raised in April. Wow, the walls of leverage are really closing in on us!

Beyond the politics, the policy fig leaf remains this notion that budgeting means austerity, and we cannot impose austerity when the economy is in a recession. While it is the case that our economic growth is hardly strong, it is important to remember the recession ended in June 2009. At what point between now and a run on the dollar do you suppose politicians will find it convenient to live within our means? Easy money has flowed into the assumptions of the Obama administration like free booze flowing into the cup of an alcoholic.

While thoroughly discredited among real economists, Keynes remains the patron saint of patronage spending politicians as that video so humorously portrays. When the hangover hits us the answer is always “serve me another drink” of spending, praying “Lord give me the gift of sobriety, but not yet.”

It’s hard to find a real Keynesian outside of political circles these days. Last fall I pointed out how a renaissance in macroeconomic methodology has empirically disproven the existence of the Keynesian spending multiplier. There has also recently been another groundbreaking paper published using World Bank data. The Romans did not need social scientific phrenology to justify their bread and circuses, but apparently our pols do.

Some people think of Paul Krugman as a Keynesian, he’s not. Krugman is an on message political pundit. If you have never heard of him, I’m talking about that guy who walks around New York wearing a sandwich sign. On the front it reads “I won the Nobel Prize in economics for proving the free trade position” while on the back it reads “I was a microeconomist that never published serious work on the macroeconomy so listen to what I have to say about matters beyond my expertise and I will tell you what you want to hear.” He also has a nice writing gig for the New York Times.

During the Bush administration, when Democrats wanted to hear that deficits were bad and threatened our future prosperity, he very dramatically warned his readers that long-term rates were about to start rising uncontrollably. Writing in 2003 he predicted:

But what’s really scary — what makes a fixed-rate mortgage seem like such a good idea — is the looming threat to the federal government’s solvency.

That may sound alarmist: right now the deficit, while huge in absolute terms, is only 2 — make that 3, O.K., maybe 4 — percent of G.D.P. But that misses the point. ”Think of the federal government as a gigantic insurance company (with a sideline business in national defense and homeland security), which does its accounting on a cash basis, only counting premiums and payouts as they go in and out the door. An insurance company with cash accounting is an accident waiting to happen.” So says the Treasury under secretary Peter Fisher; his point is that because of the future liabilities of Social Security and Medicare, the true budget picture is much worse than the conventional deficit numbers suggest.

my prediction is that politicians will eventually be tempted to resolve the crisis the way irresponsible governments usually do: by printing money, both to pay current bills and to inflate away debt. And as that temptation becomes obvious, interest rates will soar.

Well no kidding! But now with a Democrat in the White House, Krugman’s loyal readers are looking for a different conclusion. With our fiscal deficit twice the percentage of GDP now than it was then, Krugman tells anyone who still takes him seriously that an infinite demand exists for U.S. Treasury debt.

That Pollyannaish notion has been humbled by the most frightening metric I have seen so far this year. When the Fed released its Flow of Funds Report for 2011, it revealed an astonishing 61% of Treasuries sold were purchased by our very own central bank. Take a look at this disturbing trend. 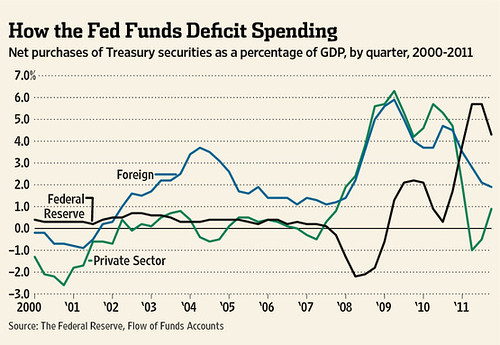 The smart money has stopped buying our debt, but don’t worry folks, the Reichsbank has everything under control!

The reason we must budget, as a nation, is that the failure to do so brings dire consequences. We have become so accustomed to the benefits of the seigniorage of our currency, but those benefits come with responsibilities. If we continue to abuse our privileged position in world finance by exporting inflation to the rest of the world, we are fools to ignore the reality that alternative options for the world’s investors are emerging all around us. The day they turn their back on us will be the day our financial house of cards will collapse with such fury it will do more damage to our domestic economy than the most unthinkable terrorist attack.

Indeed an American fiscal reckoning is our single greatest national security threat. While Obama enjoys the hawkish pleasures of rattling swords with Iran, not only is the probability of a nuclear armed Iran actually launching a Hiroshima grade atomic warhead at the continental United States vanishingly small compared to the near certainty of an eventual mass sell-off of Treasuries, its economic impact would be smaller in comparison.

The economic damage of an acute spike in interest rates would harm our economy more than most people realize. If the Federal Reserve had suddenly jacked interest rates up several whole points today, most people grasp that would be a bad thing, and yet that would only be short-term rates as the Fed merely sold T-Bills. A flash crash of 10 year Treasuries that knocked long-term rates up several hundred basis points in a matter of a few days or even a few hours on our presently fragile economy would end American prosperity as we have known it. These are not times to play games with the bond market. A White House that submits budgets that even its own party is not supposed to vote for is rolling the dice on America itself.