Bloodletting is the withdrawal of blood from a patient to cure or prevent illness. It was based on an ancient system of medicine in which the proper balance of bodily fluids like blood were considered necessary to maintain health. Despite making plenty of sense in theory for centuries, Bloodletting never produced any empirical evidence to justify its use, making the perfect metaphor for the Keynesian school of economics.

When John Maynard Keynes published his General Theory of Employment, Interest, and Money in 1936, his ideas were already well known and being implemented in the first FDR term under the experimental advice of Rexford Tugwell. Keynes argued that recessions were caused by excessive saving by the private sector that reduced “aggregate demand.” Keynes concluded that only the government could get the economy growing again by increasing its spending.

Foundational to Keynes’ theory is the spending multiplier. Without this multiplier, his theory could not overcome Frederick Bastait’s Broken Window Fallacy. To create a net increase in GDP, government spending must generate more economic activity by a factor greater than 1.

Secretary of Agriculture Tom Vilsack littered his speech in Portland last week to a select group of Oregon business leaders with several Keynesian claims. Using the spending multiplier, Vilsack was able to assure them that if Obama’s latest attempt at stimulus is passed, 5,500 net jobs will be created in our state. He pointed to how good food stamps have been for the agricultural sector. Food stamps have indeed been good for the agricultural sector, but how good are they to the overall economy? Vilsack is still sticking to a multiplier of 1.84. With all the technocratic precision a number like that implies, the lay person is almost intimidated from asking if there is any actual evidence to support his claim.

Economics having a reputation as a fairly rigorous, data-driven social science, you would think there would be empirical evidence for the Keynesian spending multiplier all over the place. There is none and never has been.

This was good enough for the conformist days of the 50s and 60s. Everybody read Paul Samuelson’s old economics textbook that laid out Keynesian theory like a catechism. First published in 1948, it remained unchallenged and unquestioned for decades.

Then something happened that contradicted the very core of Keynesian theory: stagflation. Anyone who has actually read Keynes’ General Theory knows you cannot have both a recession and inflation at the same time. By the end of the 70s, the Keynesian school was thoroughly discredited, its dominance toppled by Monetarism. Look at the economics departments of the world today; they are all Monetarists now.

If the economics profession has abandoned Keynes, why do politicians still embrace him? Former president of the Foundation for Economic Education Richard Ebeling has the best answer: “While the Keynesians dreamed dreams of mastering and manipulating the market economy through the miracles of ‘activist’ monetary and fiscal policy, ordinary politicians looking for ways to get elected and reelected, found in the Keynesian Revolution their own miracle.”

By 2009 Keynesian economists had become a rare breed at the leading research universities. With Christina Romer and a few of her Facebook friends all working at the Council of Economic Advisors, there just weren’t any respected Keynesian macroeconomic specialists left to provide a credible independent analysis when evidence was desperately being scrounged to sell Obama’s first attempt at stimulus. There were plenty of celebrity Nobel prize winners like Paul Krugman and Joseph Stiglitz who were once serous microeconomists, but they had long since pocketed their awards to move on to the more glamorous world of highly paid pundits.

A new found fad emerged that year, to empirically verify the Keynesian spending multiplier, but these attempts fell flat. The most generous came from UCSD’s Valerie Ramey who estimated that the multiplier could be no more than 1.4, and only if policy makers can time their spending perfectly to finance the projects with the highest return on investment (good luck with that). Serious problems with her methodology prevented it from publishing in a peer reviewed journal until after congress passed the stimulus bill. After fixing her mathematical errors, the multiplier deflated considerably to a window of 0.6 to 1.1. That is to say, if the stars align you basically break even, but real congressmen writing a real stimulus bill will likely contract GDP. Well how prophetic!

Harvard’s Robert Barro discovered that in the Keynesian moment that lives on in our historical memory the most, WWII, huge government military spending contracted GDP with a multiplier that was 0.7 at the most.

The study that did the greatest damage however came from a self described Keynesian, indeed the best and the brightest of them. Berkeley’s Christina Romer found the spending multiplier to be nearly 1 at best, but a multiplier from tax cuts to be 3! Like stagflation, if true, Keynesian theory cannot survive, even among policy makers, with such a devastating counterfactual. Its central premise is that government spending stimulates the economy twice as much as tax cuts, not the other way around.

Romer became Obama’s Colin Powell. She was forced to go out and defend the 2009 stimulus bill even though her professional experience cried out against it. Within the administration, Romer’s advice was discarded at nearly every juncture.

When we think of the politicization of science, our minds jump to salmon and CO2 levels. What about economic science? Romer was forced to use an inflated spending multiplier of 1.4 in her econometric formula she submitted to Congress. How different was that than Colin Powell being forced to present cherry picked WMD evidence to the UN Security Council?

If we would have been lucky enough to get a multiplier of 1.4 out of that $814 billion “Recovery Act” then national unemployment would indeed be below 8% as their model predicted. If what we really got was 0.9, then that would mean we now have a higher unemployment rate than we otherwise would have had if the 2009 stimulus bill never passed. That more than anything else is what the chart below shows. This is the econometric model the Obama administration submitted to Congress that year with the actual outcomes superimposed as red data points. 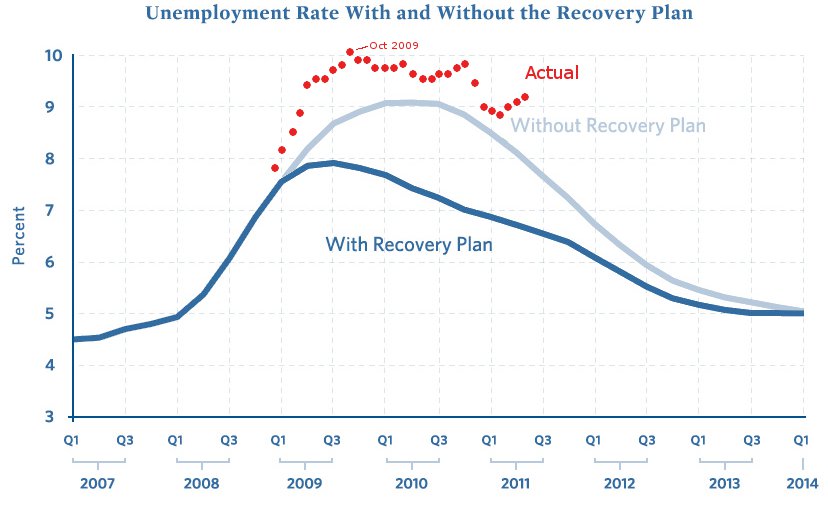 Implementing a stimulus package with a multiplier of less than 1 has proven to be a national tragedy, but the greatest tragedy of all is that we had solid economic science at the time warning us not to do it. That the 2009 stimulus was an absolute failure is universally acknowledged. When I read editorials today arguing that it failed because it was not big enough, I think of all those medieval doctors who attended their patients’ funerals thinking “if only I bled him more!”