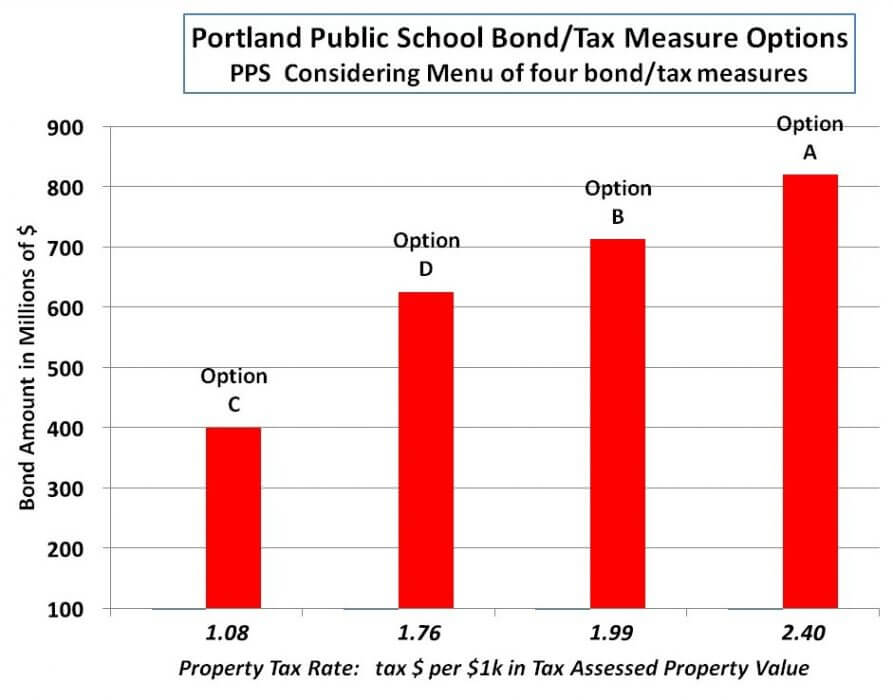 I attended all of the meetings held by this Technical Advisory Committee for 2012 Long Range Facility Planning.  These meetings were used to develop and complete the menu of four recommended bond/tax approaches (options) featured in the above chart.  The PPS Superintendent and Board may choose one of these four approaches, or may elect another (altogether different) approach; but most likely, the Superintendent and Board probably won’t stray too far from one of these four approaches.  I provided public testimony to the Superintendent and the Technical Advisory Committee against Options A, B and D (featured above).  These three approaches would ask voters for a sharply higher bond amount than the $548 million bond requested in last year’s failed measure.  I instead testified Option C as reasonable.

Option C asks for a significantly lower bond amount than the bond amount requested last year; and so, it is the only approach of the report’s four in which PPS can actually say it is being financially prudent without also asking voters simultaneously for even more construction monies than previously requested and denied.   Interestingly, on a related matter, the Committee’s final report seems to adopt one of my earlier recommendations of extending the bond term beyond six years so as to reduce property tax rate (the failed bond measure of one year ago had only a six year bond term which is quite unconventional for long term assets like school buildings, and raised the requested property tax rate much higher than conventionally warranted).

The PPS Board is scheduled to take public comment on the final report, recommending the menu of four school bond/tax measures featured above, on the evening of Monday, May 21st (Location and time here: http://www.pps.k12.or.us/files/board/2011-2012_Regular_Board_Meeting_Calendar_REV_9-13-11.pdf).  I plan to present public testimony favoring Option C and recommending against the other three options.  Tangentially, I am hoping in the interim the Multnomah County Library Levy is either defeated or passes by only a small margin so as to dim PPS’ prospects for Options A, B, and D; leaving PPS decision makers to perceive Option C as most politically palatable of the four options (or so, I surmise).

If the PPS Superintendent and PPS Board were to choose Option C, I may still oppose it come voting time but my level of passion and effort in defeating it will be relatively subdued compared to that of last year’s failed bond/tax measure.  I did tour several school buildings as part of the 2012 Technical Advisory Committee meetings.  As a result of these tours, I can say there are schools such as Sunnyside Environmental School and Rigler which seemingly could use wholesale renovation; but there, also, are other schools such as Markham and Hosford which seemingly could very easily make do with only some maintenance-like focus.  It should also be noted well structured and maintained school buildings are said to improve local area home property values.  So, I think Option C is reasonable although it does feed the public school monopoly “beast.”