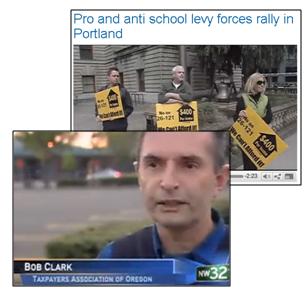 – Bob Clark of the Taxpayer Association of Oregon  told KGW-TV last night that the tax was recklessly “30% higher than it needed to be”.
– Dr. Eric Fruits and the fantastic team of “Learn Now, Build Later” were featured in The Oregonian here.
– Roxanne Ross of Americans for Prosperity told KATU-2 about dishonest ads,
– Jeff Reynolds of the Multnomah County Republican Party told KGW-TV “I am relieved. I am very concerned about the economic effect of this bond on the entire city.”
– Lindsay Berschauer was a superb speaker at countless town halls (Lindsay is a Policy Analyst, Oregon Transformation Project.) Thanks also to Richard Ellmyer of Good Growth, Jim Karlock, Rene Kimball and Hugo Schulz for your sacrifice.

We notice that the response to the Portland School Bond Tax defeat that the supporters of Measure 26-121 are saying they are going to work on another plan — possibly a different bond measure.   We hope they bring to the table some of the great wisdom and economics shared by the No on Measure 26-121 team.