Like many other truths about the world we live in, you would never know this from listening to politicians’ speeches, but we are living in the golden age of American manufacturing. More products are “Made in the USA” today than ever before. It really began to take off after the passage of NAFTA and the Uruguay round of the WTO in the early 90s, and has been booming ever since, peaking in 2007 before the global recession, bringing us down to late 90s levels just as it brought stock prices down to late 90s levels. We have been experiencing a V-shaped recovery in manufacturing ever since. 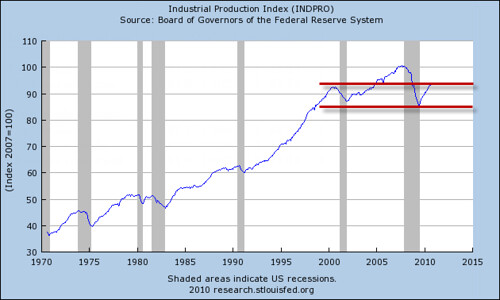 This data lags a bit, but other metrics available right now indicate we have surpassed 2007 levels, enjoying new highs; why no celebration? During this same time period, automation has reduced demand for factory floor labor, barcodes have reduced demand for dock worker labor, and email has eliminated countless white collar clerical jobs. We produce more, but with less people. This phenomenon has had less effect for the more labor-intensive service sector, so policymakers seem to have felt the need to invent a way to reduce job creation for the rest of our economy, that innovation being occupational licensing.

Like any other form of protectionism, occupational licensing seeks to artificially reduce supply, transferring rents from consumers to existing businesses. A small group experiences a marginal gain at the expense of the broader society incurring a net loss. Just as governments enjoyed the tax revenue that tariffs supplied, the fees from occupational licensing have provided a rather ironic new revenue source for elected officials. The same politicians that have their speech writers laud job creation at every opportunity have their policy wonks look for new ways to literally tax the very act of creating a new job.

Two timely reports were released last week highlighting what a widespread problem this has become. First the Institute of Justice, which is representing Portland Towncar drivers from anti-competitive City of Portland ordinances has ranked the 50 states and DC by the degree to which they limit the supply of labor to 102 occupations. Oregon did not fare well as the 4th worst state in terms of the percentage of occupations requiring government permission. Oregon ranked 6th worst in terms of the burden of the licensing requirements, requiring an average $267 in licensing fees in addition to being required to pay for an average of 586 hours of formal instruction which is far more expensive than the license itself. We are not even talking about doctors and lawyers here. These are the average costs imposed on people seeking employment as cosmetologists, manicurists, fishermen, masseuses, security guards, travel agents and the like.

The second report is a survey of small business owners by the Kaufman Foundation that seeks to identify the most salient public policy variable that makes one state more small business friendly than another. Occupational licensing topped the list. The report noted: “Although taxes are a dominant topic in many discussions of a location’s attractiveness to business, our analysis indicates that small businesses tend to care more deeply about the friendliness of a region’s licensing regime by a factor of nearly two.”

While this is just emerging as a public policy issue of the first order, the economic literature on occupational licensing has been conclusive for a long time, the lion share of the empirical work having been done by Morris Kleiner. He published an excellent summary of his work in the Fall 2000 issue of the Journal of Economic Perspectives. Six years later he published a more comprehensive summery in the book Licensing Occupations: Ensuring Quality or Restricting Competition? 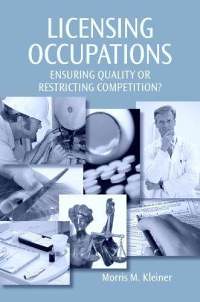 Because these policies largely happen at the state level, it was very easy for Kleiner to measure differences in both the price and the quality of labor that is licensed in one state but not in another. The costs imposed on consumers are clear and present in licensed states, but improvements in quality are nonexistent. Indeed when there was a statistically significant difference in quality, it was the unlicensed states that enjoyed an advantage just as the theoretical benefits of competition would have predicted.

Probably one of the most egregious examples of silly licensing bills making the rounds in state legislatures today comes from Florida’s 1994 law making them the first state to license interior designers.

In the 2012 Oregon legislative session, SB1521 sought to make Oregon the next state to mandate interior design licenses. Fortunately it died in committee. That good news is still over shadowed by a far more serious bill that passed the year before.

The way in which existing members of a business cartel such as Taxi companies in Portland seek to erect barriers to entry into their own profession is obvious. What is less obvious is how members of one profession lobby to erect barriers to entry into other professions that offer a substitutable product. The most effective lobby in this regard is the medical profession, and its latest victory in Oregon was the 2011 legislative session’s effort to end the fast growth of the midwiving business in Oregon with the passage of HB2380 60 to 0 in the House and 28 to 0 in the Senate to be happily signed by our MD governor.

When it was first introduced, HB2380 was like many long shots that get a first reading with little hope for traction, but later that summer, when a Eugene woman gave birth to a stillborn child, blaming everything on her midwives in an internet post, the powerful medical lobby saw an opportunity and swung into action. This new law squashes a growing industry, mandating a $2,100 licensing fee and 730 days of instruction before new entrants can be granted the right to work as a midwife in the state of Oregon starting on January 1, 2014. Not only was there no evidence that Oregon’s midwives performed their services at a lower rate of quality than states that have licensing regimes, but Oregon’s market for midwives has been booming at the same time Oregon has continued to lead the country with one of the lowest neonatal mortality rates.

The demand for midwives in our state has been growing for several reasons. Oregon has a broad market for alternative medicine particularly in the Portland and Eugene metro areas, but the exponential growth over this past decade is likely also due to the way social media has spread the positive experience from past mothers to future mothers, and of course the fact midwives are substantially cheaper than hospital births has no doubt been a leading factor as well. I’m thinking the medical lobby is quite comfortable competing on quality, but they must harness the coercive power of the state to avoid competing on price.

This is a classic example of Public Choice Theory in action. James Buchanan won the Nobel Prize in Economics for showing how demonstrably bad laws that concentrate their benefits on a few at the expense of everyone else hold a political advantage in being passed because the incentives to lobby for the bill are strong for the beneficiaries while the incentives to fight it are weak among those whose costs are diffuse.

The passage of such restrictive licensing on midwives is a textbook lobbying victory that exposes hypocrisy in both political parties. Every Democrat voted for this bill, the same Democrats that will go to the mat to prevent Republicans from using licensing restrictions as a means of limiting the supply of abortion providers, but when it comes to the very cost effective services of midwives they are all for limiting the reproductive choices of women. Republicans go to the mat to fight the least significant driver of health care costs, the right of patients to sue for malpractice, but have been consistently complicit in passing government regulations that limit the supply of healthcare. Every Republican voted for this bill, the same folks who make such a fuss over government control of healthcare voted for more government control of healthcare without batting an eye.

There is however one area in the Medieval guilded world of healthcare services that Oregon leads the nation, our freer market of nurse practitioners.  Oregon leads the nation in letting nurses with a master’s degree compete with MDs by prescribing drugs and administering primary care. No doubt that is why Oregon has lower primary care costs than most other states, but this greater competition probably also explains why Oregon also leads so many other states in metrics that measure the quality of primary care.

It works so well for nurse practitioners, why not dental hygienist practitioners providing low cost dental care too? So far Oregon’s ADA has been more effective in keeping out the competition than Oregon’s AMA, but the principal is the same and dental care is even less complex. How many rural communities in Oregon have no dental office because of the way we have intentionally limited the supply of people who are allowed to open one? Instead Oregon law says to perfectly qualified dental hygienists “you can’t handle the tooth!”

This is really just the tip of the iceberg of potential benefits that lay within reach, like low hanging fruit, to both lower health care costs and employ a lot more people in a sector of the economy that gets in greater demand as our population ages. There are all manner of paramedical professions from medical assistants to various technicians that could be doing a lot more and could be paid a lot more, providing services that seem impossibly unaffordable now under laws that bottleneck our medical labor market to the few people that get accepted to and graduate from medical school.

Imagine a hospital that could take a 19 year old medical assistant with a mere associate degree and train him to perform a surgical procedure which he would then perform for $20 an hour with as much skill as our best surgeons do today. He could be a member of a team led by a managing nurse practitioner that herself could make diagnostic decisions assigning patients to the right procedure. These could be the manufacturing jobs we are looking for, that simultaneously bend the medical cost curve the way we talk about with phony gimmicks like price controls, digital medical records, tort reform, and the perennial promise to fight “waste, fraud, and abuse.” This is what real organic job growth and real cost control looks like, but it requires breaking the back of the politically powerful AMA.

This is more possible that you might realize. Since the end of the Second World War, trade liberalization has proceeded despite the commonly held protectionist impulse of most voters. Overwhelmingly conclusive empirical evidence of the benefits of free trade fills the pages of peer reviewed journals, but the mercantilist mentality will always be among us the way most people will always believe that heavier objects fall faster to the earth than lighter ones.  Just as trade liberalization has been an elite led agenda, labor market deregulation will require the same top-down leadership.

If the effectiveness of public interest law firms like the Institute of Justice and the Pacific Legal Foundation are any clue, perhaps the courts will pave the way just as they provided a top-down leadership that forced civil liberties onto the American South, a far tougher political juggernaut than the AMA. What we need is the revival of a legal doctrine of the “right to earn a living” that prevents legislatures from granting monopolies and barriers to entry to the labor market as a matter of the substantive due process of law that violates an individual’s right to compete. For this reason, we ought to follow the Towncar drivers’ suit against the City of Portland very closely.