Mid last week, very early in the morning, in a former credit union building that ironically is about to be demolished to make way for the Milwaukie light rail line, Trimet’s board, over the shouts of protestors, voted to approve a long list of service cuts from the elimination of entire bus routes to a reduction in others’ frequency. The next day Oregon’s very own Randal O’Toole participated in a timely panel discussion about how local public transportation priorities get distorted by the dangling carrots of federal money.

This event was scheduled to coincide with the release of O’Toole’s paper on the many street car development projects that have been taking the nation by storm since the passage of the 2009 stimulus bill. Portland is of course right in the middle of it. Our leading candidate for mayor Charlie Hales pushed hard for our first street car. He then faced a tough reelection campaign. Tapping into the deep pockets of the rail lobby he trounced his opponent only to quit midterm to take a lucrative job as a salesman for HDR, a lead benefactor of this street car craze, to pitch street car projects in other cities by telling a tall tale about Portland’s transit orientated development. In a classic case of post hoc ergo propter hoc, he spoke before city and state planning boards across the USA telling them how much economic development followed Portland’s installation of its first street car line.

What Hales failed to include in his sales pitch was the fact that Portland’s urban renewal districts along which its street car was built required nearly $1 billion dollars in subsidies, a tremendous amount of money for a city of Portland’s modest size. Nearly half of it was spent in the Pearl District. He also failed to mention that these subsidized developers built six thousand new parking spaces too. Without the subsidies or the parking spaces, there would be no Pearl District, but the absence of the street car, one of which costs more than six times the price of a brand new bus, the Pearl would only be missing an expensive way for affluent Portlanders to ride for free up town to catch a show at the Schnitzer or buy pricy tomatoes at PSU’s farmers market.

Priorities like these have forced Trimet to cut services to the less glamorous folks who actually rely on public transportation for mobility. Trimet gets some start up money for these street car projects, but not enough to fund all of it or deal with higher maintenance costs. It reminds me of a principal of personal finance my frugal parents taught me. A sale that offers 50% off something you don’t need does not save you any money. The powerful people who influence and benefit from Portland development planning rarely use public transportation themselves, but are quick to stick Trimet with higher costs in pursuit of “free” federal money, even if it means literally leaving the working class in east Multnomah County out in the cold as they are forced to wait longer and longer transferring to connecting busses.

O’Toole’s paper is too detailed to fully summarize for you just how wasteful these street car projects are so I really suggest you take the time to read it in its entirety by clicking here. I would like to shine a light onto a broader point, that in blowing so much money on expensive rail projects, Trimet is responding rationally to its customers’ desires.

Its riders want frequent convenient service with little care as to what kind of vehicle picks them up, so when Trimet eagerly leaps into costly modes of transportation that threaten its overall ability to provide mobility to its ridership, this puts Trimet’s passengers in a direct conflict with its strategic goals. At only 25% of its revenue, the fares actually paid by Trimet’s riders make their hopes and desires peripheral to Trimet’s planning. The powerful folks who control the commanding heights of transportation policy are Trimet’s real customers. So Trimet will reduce the frequency and convenience of its bus routes without batting an eye to meet its new obligations to build and operate all manner of expensive fads from the street car to even more expensive monstrosities like the Westside Express Service (WES) all of which possess one common flaw: at maximum capacity they can serve very few people. The customer is always right, but Trimet’s riders are not its customers.

Even more than street cars, WES is the starkest example of transportation planning gone terribly wrong. I am told that it remains one of the most costly means of ground public transportation in the world per passenger mile. It’s so bad, WES seems almost to be a satirical parody of Portlandian futility. Considering the possibility it might be discontinued sooner rather than later, I recently went for a ride on WES to see this for myself. Just waiting for the first afternoon train to Wilsonville immediately revealed to me three remarkable things.

First, WES’s frequency is very limited. One would assume this is a function of the lack of demand for its services relative to its $45 operating loss per passenger round trip, but it turns out the real limiting factor is the fact WES uses P+W’s rail line, a busy rout for cargo which any west side commuter knows all too well. This creates an easily knowable mathematical ceiling for its maximum capacity that turns out to be less than a rounding error to nearby Highway 217’s daily throughput.

Second, since WES did not have to build new tracks, it remarkably ended up costing $161 million dollars which could have purchased 536 brand new busses. Where did that money go? It went mostly to buy a few diesel powered trains from Colorado Rail, but it also built some of the most expensive passenger platforms in Trimet’s universe that include some of the most hideous art it has ever commissioned. Let’s set aside whether or not public art is a worthy budget item; we’re not even talking about busts of Lewis and Clark or something. Trimet spent top dollar for space hogging eyesores: a large table that would take up way too much platform space for a rail line that actually got used in high numbers. On this table are a series of heads that are supposed to represent various stereo types of people. Every stop has one of these tables with a different set of heads. 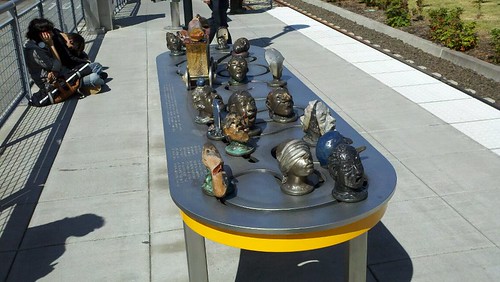 Third, few passengers pay, and Trimet does not seem to care. As I waited for the train to arrive, I asked several people waiting with me what a ticket to Wilsonville costs. Not a single one of them could tell me, but every person I asked assured me that they have never seen a fare inspector on WES. Take a look at this picture below. The two high school aged girls sitting in the front on the right told me they thought it was free. 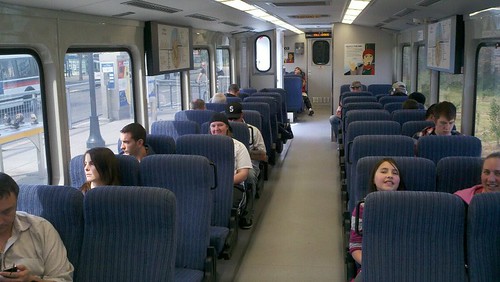 When it was time to depart, there was actually a conductor to shout “all aboard.” I thought perhaps like a real conductor he would be checking fares – good thing I had an all zone transfer in my pocket. Instead of checking fares, he proceeded to flirt with those two under aged girls for the rest of the trip. 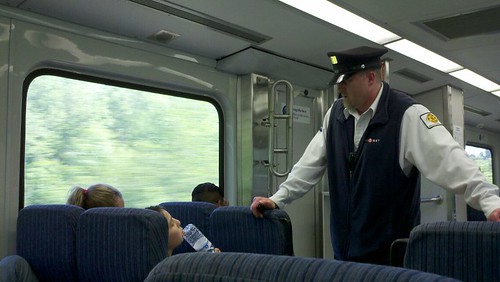 Forget about whether or not that is creepy; the real outrage is that Trimet will actually pay a guy to ride the trains to and from Wilsonville without ever bothering to have him inspect fares like a real conductor would. It’s already remarkable how low the quantity demanded of WES ridership is when the price is set at a perception of free, but since the politicians who tax local businesses and divert state and federal funds to subsidize Trimet are its real customers, as an institution, Trimet has little incentive to enforce fare payment when they know John Charles of the Cascade Policy Institute is out on the loose with his people counter independently auditing actual rail boardings.

At the end of WES’s line, the Wilsonville Transit Center was a sight to behold. A huge, mostly empty parking lot with about twenty cars parked up close to the train station. Surrounding the transit center was nothing. WES has been running for several years now, and I was hoping to find someplace within walking distance to buy an ice cream cone or something while I waited for the train to head back to Beaverton – no, nothing but empty fields for as far as the eye can see. I suppose developers are waiting for some subsidies, but given the way John Ludlow cleaned house down there a few years back, I don’t think that is how they roll in Wilsonville anymore.

I did however, observe the foot print of federal money. Something billed as a “community landmark” for the City of Wilsonville stood as a big stainless steel clock tower. 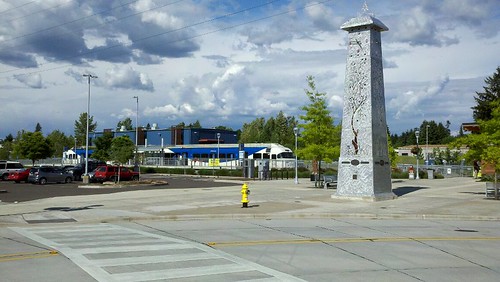 Clearly meant to stand for the ages, this beacon of waste made me think about what future generations who will be stuck with the debt we have used to finance things like this all across this country will think about our sense of judgment. Years from now, if they walk up to the plaque at its base, they will know whom to blame. 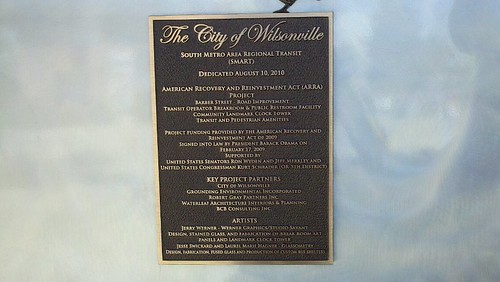 In my mind then, this tower began to look more like an obelisk. Just like an ancient Egyptian public works project this one will bear the name of the Pharaoh that taxed the people to build it.

Running a transit agency is not so hard as to assume colossal waste like this is to be expected. There are two governing principals that ensure institutions are responsive to their users’ needs and allocate their resources wisely. First it needs to be financed as much as possible through user fees. The amount of revenue raised from our gas taxes is enough money to maintain our roads. The problem is that this money gets diverted to other uses. Under the Obama administration more transportation dollars have been going to mass transit that few use than the roads that our economy truly depends on. Let gas taxes fund roads and riders’ fares fund mass transit.

The second principal is subsidiarity. The lowest level of government that can accomplish the task should be responsible for all funding and control so as to avoid cookie cutter approaches dreamed up out of the group think in DC. Subsidiarity also forces full accountability to governments that make poor decisions while rewarding competent administration of public resources. Otherwise, local governments will get a free hand in agreeing to wasteful projects if it means turning down federal money that was taxed from its citizens, sent to the beltway in a leaky bucket, and stove piped back with strings attached that often make no sense on the local level. By mixing up the funding and the authority, local officials often admit to constituents that a project has major flaws, but are able to argue that not getting our share of federal dollars would be worse.

Without these two principals of user-pay and subsidiary we will continue to hear the perennial call for more infrastructure spending followed by a bait and switch being pulled where the stuff we need gets delayed and stuff like WES gets proud politicians’ plaques. In the case of public transportation, it’s as simple as having riders becoming customers once again.