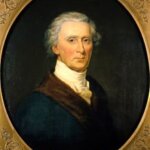 Every July much is said by eloquent historians, civic and religious leaders, and—thanks to blogs and social media—Americans everywhere, about the Declaration of Independence, the meaning of the American Experiment, and the price of freedom. Independence Day is a moment to be grateful for the blessings of liberty and to remember the gifts many sacrificed so much to leave us.

But this year we also mark the 180th anniversary of the death in 1832 of the last surviving signer of the Declaration. Charles Carroll’s life spanned nearly a century. By the fiftieth anniversary of July 4, 1776, Carroll had outlived Thomas Jefferson and John Adams, who both died on that day.

At the time of the signing, Charles Carroll was the wealthiest man in the American colonies. The risk he took in siding with the cause of independence was acknowledged to be substantial, both in material terms and in his social standing as one of the most prominent citizens of Maryland. In his book, Charles Carroll of Carrollton: Faithful Revolutionary, biographer Scott McDermott recounts that when John Hancock asked Carroll to sign―and Carroll responded, “Most willingly”―a bystander commented, “There go a few millions.”

And just to make sure that everyone, including King George III, knew which of Maryland’s many Charles Carrolls was the signer, he proudly added the words “of Carrollton” (his Frederick County estate). Thus, history remembers him as “Charles Carroll of Carrollton.”

Carroll is unique among the signers for more than just his wealth. He was, in fact, ineligible to vote or to hold public office when he was chosen by the Maryland Convention as a delegate to Congress to approve the Declaration on its behalf. Maryland’s early Toleration Act granting religious freedom had been overturned in 1692, so Catholics could not vote, hold public office, worship in public, or freely educate their children in their faith.

Carroll’s participation in the War of Independence was motivated by his firm belief in natural law and rights, government by consent of the citizens, and freedom of religion. The Catholic minority in the British American colonies recognized in the cause of liberty the path to equality under law.

Carroll strongly supported and collaborated with George Washington during the war, influenced the crafting of the Maryland and the U.S. Constitutions, and served as the first senator from the new state of Maryland. His public life was long, and he was a giant figure through the early decades of the 19th century. Looked up to as an elder statesman and symbol of national unity, at his death, the Baltimore American called him “the last of the Romans”―a reference to the classical prototype of the generation who built the new but maturing Republic.

Charles Carroll’s brief testament to the America he would leave behind was written on a parchment copy of the Declaration, dated July 4, 1826. He wrote in the style of a man educated in the 18th century, but behind the formality is a stark humility and a simple message intended for today:

“Grateful to Almighty God for the blessing which, through Jesus Christ our Lord, he has conferred upon my beloved country, in her emancipation, and upon myself, in permitting me, under circumstances of mercy,…to survive the fiftieth year of American Independence, and certifying by my present signature my approbation of the Declaration of Independence adopted by Congress…, and of which I am now the last surviving signer, I do hereby recommend to the present and future generations the principles of that important document as the best earthly inheritance their ancestors could bequeath to them, and pray that the civil and religious liberties they have secured to my country may be perpetuated to the remotest posterity and extended to the whole family of man.”

This July 4th, as we celebrate our freedom and the legacy of each of America’s founders, let us also “remember Carroll’s sacred trust…and all [who slumber] with the just.”

Kathryn Hickok is Publications Director at Cascade Policy Institute, Oregon’s free market public policy research organization. A lover of history, she has traveled extensively to sites of historical and cultural significance throughout the U.S., Canada, and Mexico. She is a graduate of the University of Portland and Kolbe Academy Home School.