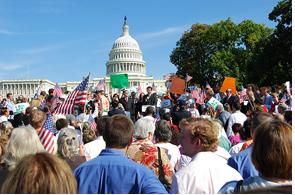 Taxpayers do not despair you have lots of friends!
Musings about the state of our nation.
By Richard Lonetti,

It is hard to describe the excitement generated by 1,800 people from all across the country excited about Liberty, Free Markets and Limited Government. Meeting in Washington D.C. The Americans For Prosperity Summit included some 33 energized people, from Oregon, (8,000 members, 4,000 active), who met on October 10 and 11 to exchange ideas with others from 23 states and hear ideas from some of the best minds and writers in America.

This second annual summit was held as a tribute to President Ronald Reagan who believed the Government is rarely the solution to our problems. The various presentations were liberally seeded with Reagan’s pithy sayings which still ring true like “There is nothing closer to immortality than a government agency once born.”

Speaker George Will, who is found in 450 newspapers and Newsweek magazine, said that he was uplifted by all the energy of the summit from his often depressed state caused by living in Washington. He bemoaned the U.S. culture of “entitlement” and “excess of consumption” that permeates our citizens. Quoting from the song “America the Beautiful” he admonished us to “…confirm thy soul with self control…”

He went on to say how too many have come to believe that “…someone else will provide…” citing that our national savings rate was 10% in the 1980’s, sank to 5% in the 90’s and went negative in 2005. He said we had lost sight of the “pain of paying” which follows “the pleasure of purchasing”.

He asked what happened to Thrift and Industriousness? He questioned the creation of a “Welfare State” for the elderly to be paid for by their own children and grandchildren.

He commented on the “fact free” arguments about health care. He bemoaned those who thought the health care system could be run by the government citing the Canadian experience where “…everything is free, but nothing is available.”

Increasingly, a very tiny percentage of people pay most of the taxes. He pointed out the well known fact that 40% of those filing Federal tax returns pay no tax. Which lead him to comment that if so few pay, just whose taxes can you cut or raise?

Commenting on the economic mess of the first few weeks of October, he complained that, with unprecedented swiftness, we have all but erased the distinction between the private and public economic sectors. Were we paying attention?

Steve Moore, from the Wall Street Journal, also spoke. He listed four things that will destroy prosperity: high taxes, reduction of free trade, corrupted money and government spending growing out of control. The Obama promises are to do just that by raising taxes, re-opening NAFTA and stopping new agreements like the one with Columbia, plus oodles of new spending. The Bailout pretty well has already taken care of devaluing our money.

Bob McDonnell, the Virginia Attorney General, put it that we have three big problems: excess taxation; excess regulation and excess litigation and we are headed for trouble unless we do something about them.

He also had a short analogy for those who suggested that Supreme Court Judges should be appointed who would treat the Constitution as a “living, breathing document.” He thought it was a terrible idea just like trying to play poker where the rules were “living and breathing”. He didn’t think we would ante up for that poker game nor should we appoint judges who feel the rules should change by their whims.

Fred Barnes, the Editor of the Weekly Standard, admonished all that the election is not yet over but to prepare for the worst. He felt the two most immediate threats to growth and prosperity were the risks to free trade from reopening NAFTA and not ratifying new agreements, and the Democrats push for “card check”. A card check law means that all that is needed to unionize a firm or organization is an employees name on a card which is easily coerced. This would eliminate the employees right to a secret ballot before he could be forced to join a union. Both less free trade and card check are Democratic legislative goals.

These were just some of the highlights. I will follow with some of the more detailed analysis and suggestions in the near future.