In the case of light rail, it is hard to imagine a slower means of getting around a city. The Red Line to the airport for example takes about 45 minutes to get to the airport from downtown Portland for what amounts to barely over a ten minute drive even under moderately congested traffic. During rush hour one can take Sandy Boulevard instead adding another ten minutes while the I84 is a parking lot.

The greatest outrage however is that the #12 bus line which goes down Sandy Boulevard used to stop at the airport, getting there in half the time that Max does now. The 12 still passes by the airport on its way to Gresham, but it no longer stops there. Think about this for a moment. The marginal costs of having the 12 stop at the airport are vanishingly small, but if Trimet did not eliminate it, smart travelers through our highly connected world of social media would quickly realize that the 12 is a faster option for the same ticket price. It is not the miniscule cost of having the 12 divert down Airport Road once again that prevents Trimet from offering this no brainer option; it is the reality that this competition would leave the extremely expensive Red Line even more empty.

In the case of heavy rail, Amtrak’s inability to compete with intercity busses without massive federal and local subsides, is essentially the same story playing itself out over a longer distance. The latest fad now is to assume that if rail was substantially faster than busses, then it could be more competitive. As always the other side of this equation is cost. People choosing intercity busses do so not for its speed but for its price; otherwise they would fly. Both the fixed costs and the variable costs of high speed rail approach, and in many cases exceed, the costs involved in running an airline rout covering the same distance.

If you think Amtrak’s subsidies are a waste, wait until you see the permanent subsidies required every year to make high speed rail competitive with Southwest Airlines. If the ticket prices are equal, who wants to take the slower option? Randal O’Toole recently called these proponents of high speed rail out by engaging in some truth in advertising. Here is a popular poster the rail lobby has been presenting to lawmakers and the public: 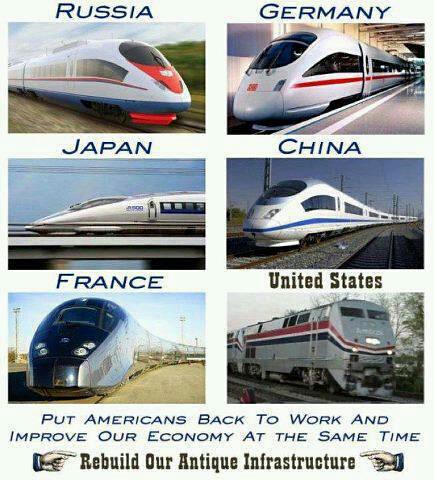 But since high cost, high speed rail cannot compete against the slower, less expensive passenger rail service of today for these price sensitive customers, O’Toole modified their poster to remind us what’s really going on here: 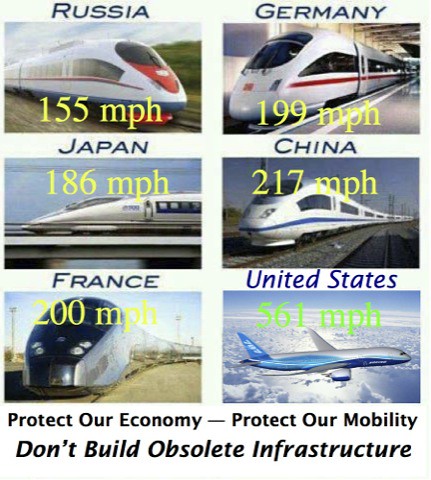 If you are not a regular reader of his blog The Antiplanner; you are missing out.