In a recent newsletter, I outlined a bi-partisan process for identifying regulatory and other barriers to business expansion, and developing a plan to remove them.

Now I will describe another Oregon plan for prosperity, “Made-In-Oregon.” This is a bipartisan strategy for expanding Oregon’s economy promoted by southern Oregon’s Republican and Democratic legislators.

For the past nine years, I have focused on building better relationships between Oregon and China. I have traveled to China many times, and on September 8, 2010, as a result of on-going efforts to promote commercial, educational and cultural ties between Oregon and China, I was named “Honorary Citizen of Fujian Province”—Oregon’s “Sister-State” in China. I mention this only to emphasize my long-term commitment to strengthening the bonds between Oregon and China. Coincidentally, in recent years China has risen from Oregon’s number six trade partner to number one. In fact, in 2010 more than $4 billion of Oregon exports were sold to China. 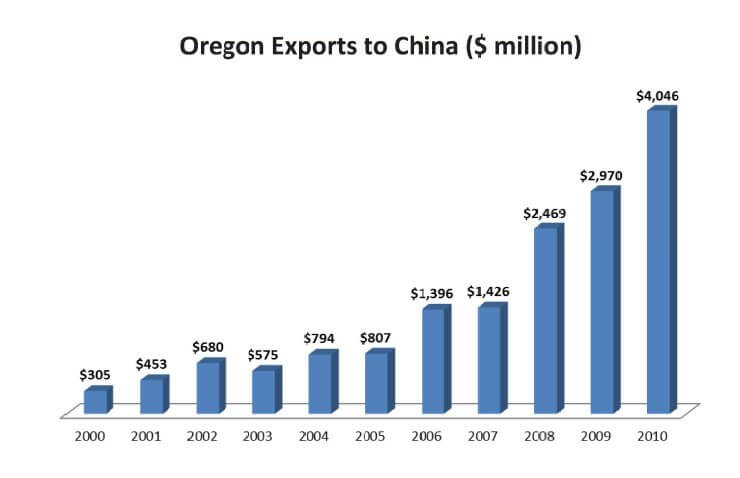 In the past two decades, we have all witnessed the incredible growth of China’s economy. Many companies from America and around the world have moved their manufacturing facilities to China. Wal-mart, the largest retailer in the world, owes much of its growth and success to the wide variety of made-in-China products we all enjoy.

Instead, we would be wise to view China’s success as an opportunity for Oregon.

I believe we can learn from history. I am nearly sixty-two years old and I remember back in the 1950’s and 60’s when Japan’s economy turned to manufacturing and Japanese companies began selling their products in America’s stores. At first it was a humorous novelty to see products with labels that read, “Made-In-Japan.” As Japan’s industrial capacities grew, the quality of its products improved and its market share increased. American companies stopped laughing.

In the 1960’s and 70’s, the quality of Japanese automobiles surpassed those of Detroit. In the electronic industry, such names as Panasonic, Sony, Canon, Nikon, Yamaha, Toshiba, and Pioneer became top-selling brands in the US.

In the 1980’s, Japan’s economic success gave them great prosperity. The yen increased in value and there were many Americans complaining that wealthy Japanese companies were buying far too much of America’s land, businesses and buildings.

Then it seems, a transition occurred. As the Japanese economy matured, concerns over balance of trade deficits with the US became points of contention, much like they are today with China. Japan responded by promoting the off-shoring of its manufacturing to the US for automobiles and other products destined for the American market.

As a result, companies like Honda opened plants in the US and have provided tens of thousands of good-paying jobs for American workers. Honda of Indiana is Honda’s seventh automobile manufacturing plant in the US. It is located on a 1600 acre campus, yet it has the smallest environmental footprint of all North American auto plants. In fact, it is a zero-waste-to-landfill facility and is designed to promote healthy wetlands and forest ecosystems.

In short, successful Japanese companies opened manufacturing plants in the USA, created thousands of family-wage-paying jobs for American workers, and did so in an environmentally responsible manner–truly a win-win outcome.

What does this Japanese-American history lesson have to do with Oregon’s relationship with China? Everything. China’s economy is maturing, and in my opinion, China is realizing that in order to dissipate gathering economic storm clouds—such as potential tariff escalations and currency conflicts—it would be prudent to encourage Chinese companies to open manufacturing facilities of many higher quality products in the USA to supply the US market.

Although Americans previously complained about Japanese cars competing with American automobiles, little is said today about driving a Honda Civic that was made by American workers in Indiana.

If history is repeating itself and China is rising economically like Japan did a generation earlier, then Oregon is perfectly positioned to attract environmentally friendly Chinese companies that would welcome establishing their plants in Oregon communities.

Chinese government officials at the highest levels in Beijing have praised Oregon for being the only American state that has passed legislation encouraging the study of the Chinese language in its public schools. St. Mary’s School in Medford was the first “Confucius Classroom” in America, and southern Oregon alone now has more than 700 students studying Mandarin.

Oregon is the only state that has created a Legislative committee dedicated to promoting its relationships with a “sister-state” in China. The Joint Senate and House Fujian Sister-State Committee is the only committee in the Oregon Legislature that is Co-Chaired by the Senate President and the Speaker of the House of Representatives.

Our message for Chinese investors and companies is this…Oregon is open for business.

Oregon has a wonderful climate, beautiful scenery, an educated workforce, and a community college system that stands ready to train Oregon workers for the unique duties that a new employer might require.

Oregon has ample electricity and natural gas, high-speed communications and an excellent multi-modal transportation infrastructure. Our workers’ compensation insurance costs are low and our workers’ productivity is high.

More than a hundred southern Oregon citizens and officials participated. The delegation enjoyed a wonderful reception and play at the Ashland Shakespeare Festival, an afternoon Hellgate Jetboat Excursions adventure, a day trip to snow-covered Crater Lake National Park, an evening barbeque followed by the Central Point Pro-Rodeo finals, an art festival in Ashland and an authentic Indian Pow-Wow. In addition to the activities, we talked business.

Our message was clear…southern Oregon is a great place to live and to operate a business. The message of Ron Fox, Director of Southern Oregon Regional Economic Development, Inc, (SOREDI) was that we are ready, willing and able to help Chinese companies locate in the Rogue Valley.

In addition to businesses, southern Oregon wants Chinese tourists to come and experience real American western adventures. And most importantly, we made it clear that we have a workforce that wants jobs, needs jobs and will make any company who comes to southern Oregon glad they did.

Last week’s southern Oregon-China event was widely publicized in the Chinese media. An English translation of the news article can be found by clicking here.

As a result of our on-going efforts, a large Chinese manufacturing company is now considering southern Oregon for its Made-In-America line of products. Several other Chinese businessmen and women committed to returning with their key associates to evaluate relocating from California to southern Oregon. Lastly, a major Chinese tour operator in San Francisco has committed to providing tour packages to Oregon for Chinese tourists who want unique and wonderful “real American’ adventures.

In conclusion, implementing a Made-In-America/Made-In-Oregon strategy to attract Chinese companies to open manufacturing plants in Oregon is another way to create new jobs, bring in an infusion of foreign capital, and promote an economic recovery based on the solid foundation of private enterprise prosperity. Inviting and embracing Chinese investment in our state is good for the Chinese and is good for Oregon.