I submitted the article below to the online blog, PortlandTransport, to present a relatively low cost alternative to a strategy that frequently emerges in Portland politics.  That strategy, advanced by officials like Mayor Sam Adams, former Mayor Vera Katz and groups like Riverfront for People, proposes removing the Interstate 5 freeway from the eastbank of the Willamette River by locating it several blocks to the east AND underground. The purpose of this would be to reclaim valuable, buildable waterfront property—thus producing a neighborhood akin to the Pearl District.

One detail that is overlooked is that the Union Pacific RR owns right-of-way at SE Ist Ave. So, having a condo in this area might mean you have a freight train rumbling by at very odd hours even if the freeway is gone! The placement of the Eastside Streetcar line on MLK and Grand Ave, all the way to OMSI and Portland’s new transit bridge are considered a down payment towards this strategy.  But the costs of the freeway removal plan are astronomical–far dwarfing even the CRC plan. However, I believe there is a way to reroute a number of connections between I-5, Hwy 99E and the Morrison Bridge, without rerouting the entire system.  This would efficiently remove the “sphaghetti” of long access ramps that now consume portions of several blocks in this Central Eastside Industrial District. I don’t doubt this is valuable property—but there’s gotta be a cost efficent way to get it!

I have suggested this to the Oregon Department of Transportation as a means to eliminate several ramps in the Central Eastside Industrial District and to consolidate merging to and from the Interstate System, the Morrison Bridge and Highway 99E.

Current: Uses I-84 to I-5 merging ramp, then splits off at SE 2nd to join ramp from I-5 to Hwy 99E.
Revision: Uses Lloyd Bv. exit, west to intersection with MLK and Grand Ave. Another potential exit is to Lloyd Bv. at NE 1st Ave.

Current: Uses ramp in #1.
Revision: Shorter ramp from I-5 leaving at SE Washington.

Current: Left turn to SE Belmont, then long ramp to I-5.
Revision: Signalized Right turn to 2-lane ramp serving I-5 Northbound and I-84. Full stop light to allow #5 below

Current: Uses lengthy ramp going over bridge and then rapid succession of mergers with #4 and then I-5 and I-84.
Revision: Signalized left turn on E. side of Morrison Bridge via ramp which now goes to I-84. Joins ramp in #4 and splits off to I-84.

Current: There is none because there is no cross traffic.
Revision: This allows left turning traffic from #5 to proceed safely.

The color maps show what the revisions should look like, compared to a photo of current design:

(The local cross streets may not in fact exist, but this is what the street name would be at that location. The red stars in the right hand map indicate traffic lights. Hwy 99E , which is MLK Bv. and Grand Ave, is highlighted in red.) 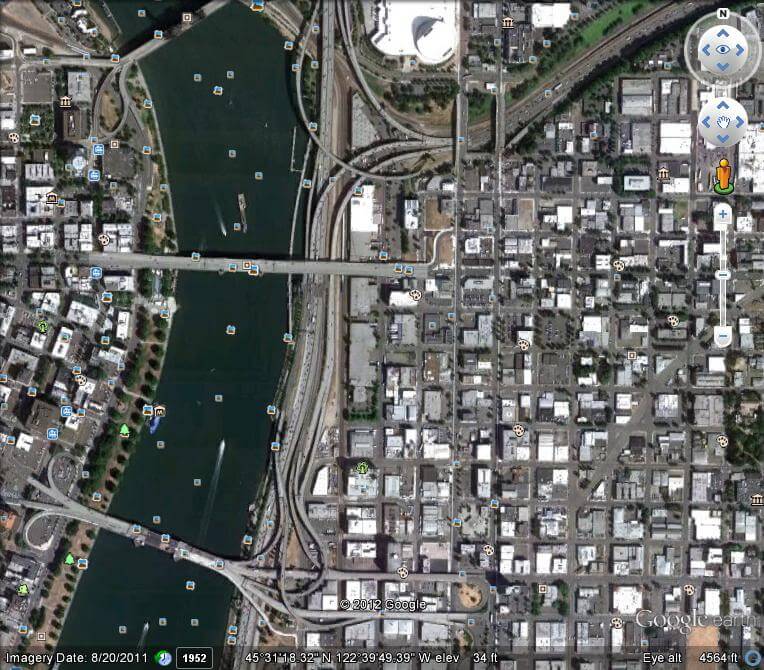 It probably will not be fiscally feasible to relocate I-5 several blocks east as some propose. However my plan would eliminate freeway ramps covering or intruding into five blocks in the CID district. It would remove the majority of the highway ramps intruding into the Eastbank Esplanade. Additionally I think the cloverleaf from MLK to Morrison Bridge Westbound could be built over. I don’t have an alternative for I-84 Westbound to I-5 Southbound except the present ramp.

The on ramp from Morrison Bridge to I-5 and I-84 would be two lanes wide, but I am not sure whether a left merging lane to I-84 would be appropriate or just use the present lengthier ramp which merges into I-84 from the right. However, the second option would not eliminate that ramp from potential building space. This eliminates a hazardous merger now where the Morrison bridge ramps merge together and then rather quickly on to I-5. This should be significantly lengthened to allow more merger time and northbound traffic would be, effectively, divided into two groups, possibly metered. This intersection would be similar to that of NE Broadway and Weidler to I-5 Northbound.

In the N/NE Quadrant project a two block long section of I-5 is proposed to have a plaza above it. So, could this not also be done over I-5 near the Eastbank Esplanade?

There is a lot of structural steel, aluminum railing and lighting in these ramps that could be salvaged for other transportation uses. The concrete can also be recycled.

Disadvantages are: More traffic on Lloyd Boulevard and far more on MLK. Jr. Boulevard, competing also with Eastside Streetcar. Property for off ramp in #1 should be purchased before any sizable building is put there. However, I think there is adequate capacity on both MLK and Grand. Merging traffic from the Morrison Br. to I-5 would come in clumps, not randomly as present.

With ODOT currently analyzing the N/NE Quadrant of the I-405 Loop in Downtown Portland it will eventually move on to analyzing the other sections. This would presumably be the SE Quadrant. Inside of the floating portion of the Eastbank Esplanade there is a portion of the Willamette, covered by the Hwy 99 ramp, that could be opened for better use. Several blocks in the Central Eastside District would be restored to completeness, ready for building. Material could be recycled and reused.

(Ron is a resident of the Portland area, has been involved in transportation issues and participates in the UN World Urban Forum. As a commercial journeyman carpenter he has built some of the major structures in the Portland area and believes that costs on public works need to be dramatically reduced.)