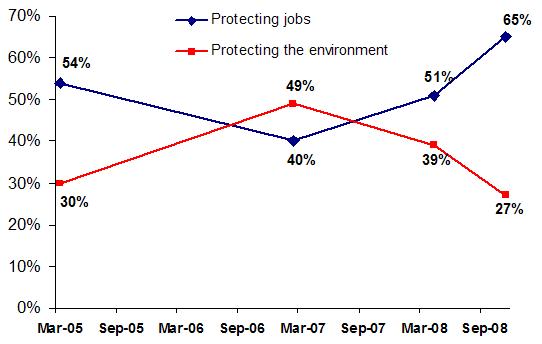 U.S. Voters: Jobs vs. the Environment
“Are you more concerned about protecting the environment or protecting jobs?”

As we have reported in the past, when the economy is good, or even stable, people are less concerned about pocketbook issues and more interested in other issues, such as the environment. Conversely, the build up of negative economic conditions throughout 2008 has clearly contributed to the increasing importance of jobs. Further, with current polls and consumer confidence indices reporting all time high negative perceptions of economic conditions, it is not surprising that majorities among all voter subgroups are putting jobs ahead of the environment.

Please feel free to call or email with any questions.