After arriving in Tampa and taking the 45 minute ride to the Oregon delegation hotel in Clearwater, I am finally settled in Sunday night at about 5pm Eastern. I missed getting to the Opening Ceremony at Tropicana Field but heard from Rep. Shawn Lindsay that it was really great.

I met up with ORP Chairman Allen Alley and we traveled around the Tampa-St. Petersburg-Clearwater area as he had errands to run.

Because today’s proceedings are cancelled, I don’t know exactly where I will be for showtime today (Noon to 3PM Pacific) but we will have a show and it should be interesting. The bridges to and from Tampa are open at this time and it looks like we will be good to go for opening on Tuesday.

The Ron Paul folks just won’t give up and I will further explain the latest shenanigans on the radio today. Below is a LITTLE bit of what has been going on here during the last few days. 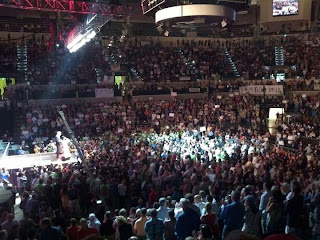 “Yesterday, I booked Jorge Emrys Landivar, a Ron Paul delegate from TX for our Webcast. After the Credentials Committee voted to accept the Maine report, Lanivar told all Ron Paul young supporters in the hallway that it is time to target all RNC members for a takeout. Donna Cain and I overheard that. We decided to put Landivar on the air.

In the interview I asked Landivar to confirm:

1) if he received a survey email sent to all Ron Paul delegates and alternates by LibertyChat.com

2) if he can confirm three questions in the email

3) what he thinks about the email.

Ralph Hallow got him talking about why the Ron Paul revolution wants to take out RNC members. I got him to confirm the email below. You’ve got to love this guy. He was very articulate, but very defensive.”

Here is the email Solomon refers to:

LibertyChat.com is conducting a poll of all Ron Paul delegates

If you have a moment, please answer the following questions

1) Do you plan to boo Mitt Romney when he speaks?

2) Do you plan to boo Mike Huckabee when he speaks?

3) If Rand Paul says anything about voting for Mitt Romney, will you boo Rand?

Your name will not be published

Thank you for your time

So, looking forward to what today holds and hope you’ll join me at Noon (Pacific time as always) for my first broadcast from SOMEWHERE in Florida!