“We at Promote Oregon would like to wish Ben Unger a happy one year anniversary,” said Nick Smith, of Promote Oregon Leadership PAC. “One year ago, Ben Unger removed his hat as partisan leftwing political consultant and moved into House District 29 to run for office.”

“After ten years of working in politics from Chicago to Salem we are glad he decided to move to Washington County to advance his political career.”

While Unger was running partisan campaigns elsewhere, Rep. Eyre has taken leadership roles in the Hillsboro Chamber of Commerce, including serving as a member and chair of its Board of Directors, and has served on the Hillsboro Planning Commission. In addition, she has been actively involved in education outreach about domestic violence.

“Never mind the fact that Unger is only renting a house in the district while he runs for office,” Smith said. “Of course we don’t blame him for only renting a house and not buying. Elections are unpredictable and buying a home is a big commitment. Now the real question is: If Ben Unger is unsuccessful in November will he renew his lease or move back to Portland or Salem to run another political campaign?”

“In any event, Happy Anniversary Ben!” 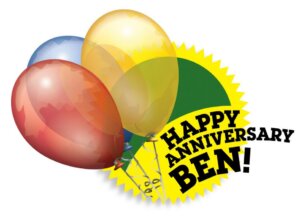