Earlier this week I had the opportunity to speak with James Buchal and confirm that he will be announcing his candidacy for vice chair of the Oregon Republican Party tonight before the Capitol City Republican Women at the Scottish Rite Temple in Salem. Like a shooting star Buchal flashed upon the firmament of Oregon politics from his quiet but effective legal career as a prominent environmental lawyer by agreeing to accept a write-in campaign when no Republican candidate filed for the office of Oregon Attorney General.

Anyone who attended an event of his or one that he attended was no doubt just as taken by his rhetorical firepower as I was. Buchal is now a highly sought after speaker post-election who has become willing to step up and help lead the organization that found itself in the desperate position of pleading for him to run.

My first impression of him was at the Gathering of the Eagles last summer. I had made my way over to John Fund’s booth to get an autographed copy of Fund’s recently released book Who’s Counting? (which Steve Buckstein ended up buying for me because they did not take a credit card). As Fund was signing my book that Buckstein was so gracious to spot me the cash for, I heard this powerful and gifted speaking voice back at the podium, as Buchal was working the crowd into the loudest applause I had yet heard that day, which was remarkable because it was getting toward the end of a very hot afternoon that caused many of the event-goers to wilt back into their air-conditioned cars or seek refuge in the event’s cooled cabin. I made my way back to the main event to take this talented orator in. I was very impressed.

Overall I was already impressed with all four of the Republican state wide candidates. I have been following Oregon politics closely since 1990 and have never seen a more impressive bunch for me to turn out for. None of them won of course, however this past election offered us an interesting controlled experiment.

Much envious observation has been made about the Oregon Democrats’ money, turn-out drive, and favorable media coverage, but the 2012 election actually demonstrated how limited an effect these seemingly salient factors actually are. Knute Buehler enjoyed the greatest Republican state level campaign in recent memory. He had the money, and Republicans actually turned out at a significantly higher rate than Democrats. Buehler not only enjoyed good media coverage, he also attracted the endorsements of nearly every major newspaper in this state, running against a very unpopular Kate Brown.

James Buchal by contrast ran from the obscurity of a write-in campaign that prevented the media from ever taking him seriously as he ran against a well respected opponent. His underfinanced campaign could not afford a professionally staffed field organization, and many of Buchal’s supporters had to paint their own yard signs. Yet the vote spread between Buehler and Buchal was only four percentage points in a state where Democrats win by well more than twice that. 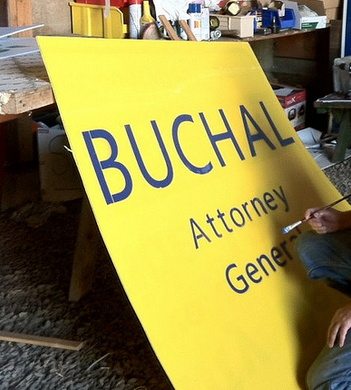 I asked Buchal directly the same question that members of the ORP central committee will most want pose. What will he bring to the state party’s leadership to help put an end to Oregon Republicans’ two decade long losing streak on state wide races? I found Buchal’s confident answer quite hopeful. He understands the importance of fundraising and the basic machinery of the party organization, indeed he has some fresh ideas as to how the state party can better support its candidates, but he recognizes that this has not been where the ORP has been lacking.

Buchal recognizes that the state party needs a leadership that can sell the idea of limited government to Oregon voters. There are diminishing marginal returns from greater and greater turn-out efforts. There simply will always be limits as to how many cast votes we can squeeze from existing registered Republicans. He recognizes for the ORP to succeed on a state level, it must win over new supporters from outside its traditional demographics. Buchal wants to focus like a laser on young Oregonians, going where they go and speaking directly to their concerns about big government. Buchal knows they have them, and he knows how to address them.

While Buchal was making a name for himself at friendly Republican events like the Gathering of the Eagles, the Oregon Taxpayers Association’s annual Lazy-Fair Picnic, and the like, Buchal’s greatest impact came from his willingness and unique ability to attend events far outside the normal Republican candidate’s comfort zone, getting before hostile audiences and politely delivering a message about limited government that has a far greater effect than the most expensive 30 second TV add.

An excellent example of this was on display as Buchal got himself invited as a guest speaker at Oregon’s annual Hempfest. There was probably an even lower percentage of likely Republican voters in that crowd than at a public employee union rally, but Buchal’s natural speaking skills managed to connect with this audience, prompting them to nod and think rather than boo and hiss as he pointed out to them that their inability to ever get marijuana legalized in Oregon is related to a broader problem where we have a nanny state that wants to over-regulate our lives as it ignores constitutional limits on its power. After the event he had newly open-minded young people walk up to him, telling him he was the first Republican they had ever considered voting for.

Buchal’s generous devotion of his time last year shaking young liberal hands at events like Hempfest will ultimately prove far more valuable to the future of the Republican Party in this state than had he spent more of his time rubbing shoulders with deep pocketed donors and expensive consultants. The ORP has plenty of the latter, but needs much more of the former. That is why Oregon Republicans need James Buchal as their vice chair.