Politicians and pundits are awash in a longing for some kind of renaissance in American manufacturing. It’s the applause line of nearly every political speech and the conclusion of countless opinion writers’ columns that something has to be done. The reality is much different; thanks to liberalized trade pushed through in the early 1990s by the first Bush administration and the Clinton administration, the United States has already entered into a new golden age of manufacturing about a decade ago: our factories are booming, and have been doing so for some time. This should be obvious to anyone who measures manufacturing the way economists do, using the very accurately tabulated metric of industrial production.

US industrial production did take a dip in 2007 along with every other leading manufacturing economy on this planet from China to Germany, but since its trough in 2009 our product output has been growing at a faster rate than our peers. We now enjoy a true manufacturing recovery that has much wind in its sails due to our newly bountiful supply of natural gas. 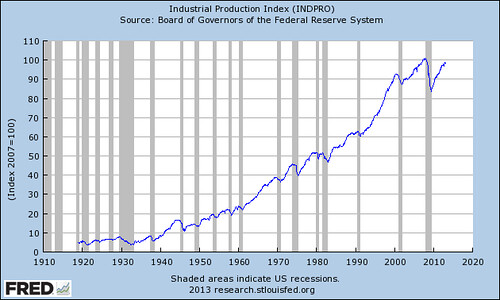 Politicians of course measure manufacturing by a different metric, not by how much we produce but by how many people are employed to do so. American opinion leaders rail against foreigners because it is naturally foolish to rail against the real culprits of declining manufacturing employment: bar codes, email, and lean production processes. This would make one the enemy of productivity itself, and productivity growth is pretty much the be all and end all of economic growth.

What we are seeing in manufacturing resembles what we saw happen to the employment engine that preceded American industry. Barely over a century ago agriculture underwent a sudden, acute revolution in productivity that diverted a river of human resources into factories. We now see the same thing happening to the manufacturing sector, but this time the river is being dammed up by a spate of occupational licensing laws imposed upon the service sector to artificially reduce the supply of labor in field upon field and inflate demand for expensive trade schools.

Of all the ways we are stifling our own economic growth, occupational licensing is the most salient and the least recognized, particularly among those of us who want to limit the weight of government’s footprint on economic activity in areas where it’s not needed. One is far more likely to read about the economic harms of occupational licensing from a left-wing writer like Slate Magazine’s Matthew Yglesias than any of the folks at National Review.

Yglesias for example points out that a clear sign for whom licensing restrictions are intended to benefit can be found in an often prominent provision in these laws that quickly revokes a license when a worker falls behind in paying his tuition at mandated schools. Yglesias asks “Would you let someone who’d defaulted on their student loans cut your hair?” He was writing about hair dressers in the State of Montana who fall under its sweeping cosmetology law and have to first pay for 2,000 hours of expensive instruction from approved schools before legally being allowed to work, and only high school graduates are legally allowed to attend. Graduates’ failure to pay this cartel poses no risks to the public’s interest in quality salon services, and there are fully functioning legal means to recoup debt. This added form of coercion exposes what occupational licensing is really all about: rent seeking.

I don’t see conservatives paying much attention to this issue. Many can get all worked up about the value of the Chinese currency, something that has almost no real causal effect on employment in the United States, but when it comes to directly barring people from getting a job, requiring an expensive government-issued permission slip, there seems to be utter silence.

Last year there was much interest in Michigan Governor Rick Snyder’s move to enact right to work legislation. Yet a far more significant effort on his part in the pursuit of labor market reforms for his state has gone largely unnoticed when he proposed the elimination of 18 occupational licenses and the entire elimination of 9 needless occupation boards, most of these reforms got approved by the Michigan legislature.

For example the right to work as a barber in the State of Michigan was significantly deregulated. Often the arguments made by the stakeholders in these bad laws were so absurd they undermined their own cause.  A director of a barbering school in Michigan who previously fleeced aspiring workers with his state-mandated tuition lit up the economic blogs with this gem of a quote: “We are turning into the Wild, Wild West. I’d like to see them get a haircut in a barber shop five years from now. It will be like rolling the dice.” Given its trade-off in economic opportunity at stake, the purported risk of a higher rate of bad hair cuts was an obvious wager to make.

While offering negligible public benefit relative to the most powerful form of commercial regulation, a company’s public reputation on yelp.com, occupational licensing laws, once enacted, quickly snow ball into all manner of counterproductive rules intended to erect higher and higher barriers to entry into the lines of work they seek to control. We should want to make employment for high school drop outs as easy as possible, not use the law to exclude them from employment opportunity.

Instead these laws continue to expand, finding any factor in peoples’ pasts possible to bar whole swaths of job seekers from future careers by force of law. These elaborate sets of rules continue to get worse and worse over time, because these laws’ modus operandi is to create a board made up of politically appointed members of the profession that are often given either direct regulatory power or are given a rubber stamp by the legislature as “experts” to routinely propose more tightening of the noose to strangle competition and innovation.

This is exactly what we see in SB387. Among other things, this bill which passed the Oregon Senate 30-0 and has landed in the queue of the Oregon House with little scrutiny now wants to elevate Oregon’s already highly restrictive laws regulating the fairly innocuous work of masseuses to also apply to owners of massage facilities.

SB387 also ads the worst of all possible language to the authority of the State Board of Massage Therapists (yes there is such a thing), by amending ORS 687.051, the part of the law spelling out the grounds for denying or revoking a massage permit. The board’s current discretion is broadened with new language to now deny a permit for “any other condition that the board considers necessary” all in the fig leaf name of the public’s protection, the board will decide who can and cannot compete against them. Broad discretion like this is quite dangerous given how easily it’s enhanced by the board’s existing power to declare an “emergency” to revoke any permit without a hearing; yes they can actually declare a massage emergency. The entire chapter of ORS 687 is the epitome of bad law and not something to be doubling down on.

To give you an idea about where this law has already gone, it’s already illegal for an alcoholic to work as a masseuse in the state of Oregon. The law does not simply say it’s illegal to perform a massage while drunk; it explicitly bans the profession to anyone “habitually intemperate in the use of alcoholic beverages” and goes on to declare the exclusion of anyone with a substance addiction of any kind. Given its language, a coffee addict’s license could be revoked at the board’s discretion if they were looking for a legal technicality to impose their will for other reasons the law does not authorize them enforce.

Singling out alcoholics offers a good example of the needless redundancy of these occupational licensing laws. Like in any other area of human interaction there are of course all kinds of ways that someone in bondage to the bottle might harm others, and there are ample ways in which that behavior is already enforced my normal means. The idea that a person struggling with alcoholism must be restricted from this profession not because of an actual wrong committed on the job but simply categorically for having this condition in the first place speaks volumes about what this law is really all about. The way SB387 gives the board even broader discretion to exclude even more categories of people from competing in this marketplace amounts to employing the coercive power of the state to empower industry insiders to manipulate that market.

Since many of the problems of occupational licensing get highlighted in progressive blogs due to the role these laws play in perpetuating poverty, this should be an easy issue for Republicans to all unite together as a caucus and defeat bills like SB387 in an ad hoc alliance with the more progressive Democrats in the House against the ruling Democratic Party establishment. That is exactly how the Columbia River Crossing could have been easily defeated as well since progressives hated it too, though for the wrong reasons. Republicans may be in the minority, but together they make a powerful voting bloc that could be playing progressive Democrats and establishment Democrats off against each other. Defeating SB387 as it comes up for a vote in the Oregon House is a good place to start.