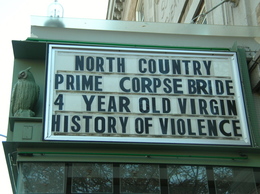 Best Summer Movies: Over the Hedge, Cars, The Inside Man, and Thank You for Smoking.

BAD: Justifying Terrorism? Watching the hero in V for Vendetta artfully murder security guards working in a television station struck me as terrorism. In another act of terrorism, the hero destroyed the British parliament building because it was under dictatorial control. Destroying buildings that represent democracy only make it harder for good citizens to recapture them. Destroying everything and creating chaos is what insurgents do. Genuine freedom fighters target military installations. Simply put, I felt this movie was so full of political extremism that I felt like it crossed the line into propaganda and Pravda — and I walked out.

United 93 was way too sanitary on how it treated their terrorist — making them seem like sincere adherents to jihad. In reality, the night before 9/11 some of the hijackers were at a strip club with one of them boasting how there was going to be bloodshed in America.

GOOD: Sex Done Right. Many people don’t know that Denzel Washington has a contract clause where he refuses to do sex scenes — even refusing to take off his shirt. Is Denzel any less popular or his love scene in the movie Inside Man any less passionate? Of course not. This is a far cry from X-Men 3. Here the hero sees his long lost love come back to life after many years of being dead and within minutes (yes minutes) they are jumping on each other in her hospital bed. In Click, the normally sweet wife is aroused by the sight of her dog humping a stuffed duck and she pleads with her husband to treat her the same way. Give us a break!!!!! Note to Hollywood: Please review the old vintage movies to see how powerful romantic moments were created, or call Denzel’s agent.

BAD: Product Placements. Big and bold hawking of consumer products in the middle of the film is a rising eyesore trend among movies. For the movie Click it was the shameless promotion of Bed, Bath & Beyond which not only too tied into the plot, but was paraded in the previews. In Talageda Nights, it was a family dinner at Applebees that was way too scripted. If that wasn’t enough they threw in an Applebee’s commercial. Note to Hollywood: if you want to feature products in your movies — watch how Seinfeld did it.

GOOD: Politics done right: Political humor is not funny if it is political. Political humor is funny because it makes fun of the absurdity, both liberal and conservative, that arises from politics. The movie Thank You for Smoking did just that by making fun of both the smoking and anti-smoking lobby by barbecuing their sacred cows. In Talageda Nights the movie throws in lobbyist from Halibuton that neither fit the story nor drew laughs.

BAD: Inaccuracies. Cinematic historical inaccuracies are far more serious than book inaccuracies, because viewers intrinsically believe what they see. It is awful enough that the DaVinci Code unloads a host of verifiable historical falsehoods, but it is made worse when the author claims on page one that his historical events are indeed “fact”. When Passion of the Christ came out the Oregonian Editorial Board jumped in to nit-pick the smallest of possible historical infractions, yet their special report on the DaVinci Code never touched the subject. The Oregonian special report on the Chronicles of Narnia pummeled author, C.S. Lewis, but they let Dan Brown (DaVinci Code) off the hook. This is what we call double standard. The media needs to play fair — especially when it comes to historical inaccuracies.

Biological inaccuracies are blatant in the animated movie Barnyard. There are four male cow characters and one baby cow all with udders. Also odd is that they drink milk. Such things really distract and creep out the audience. Note to Hollywood: When a cow drinks her own milk the farmer has to put that cow down.

GOOD: Family films blossom! All of the big money makers this year have been family films, from the animated blockbusters to Pirates of the Caribbean 2. Pirates has already landed in the top 10 grossing films of all time. Family films dominate the top 50 money making films, despite Hollywood’s low selection they offer.

BAD: Church bashing. The DaVinci Code portrayed the Catholic church as a conspiracy of maniacal monks and Mafia hitmen. This made me think where have I seen this outlandish church bashing before? Oh yes, it was four weeks earlier when I saw V for Vendetta where the bishop is a child molesting pill popper and the popular evangelist was a drug user (both help poison 80,000 people to help forward their master plan). Then it was two weeks earlier when I saw Mission Impossible 3 and the Vatican hosted a party with the world’s most notorious terrorist. Then it was a few weeks earlier when I saw Inside Man and a Jewish community leader was guilty of working with the Nazi’s. That church bashing all happened before I saw Nacho Libre (Yikes)!. Why can’t we villainize terrorists like we villianize people of faith? What fiction-based movie since 9/11 has featured a terrorist as a villain? I can’t name a single one!!!

GOOD: Noble endings: Too many movies recycle ad nauseam the same endings (1) winning money (2) winning the prom, talent show or some other contest. The movie Cars (spoiler alert) brought one of the most noble and inventive endings. The lead racecar was cheated out of front place by being knocked out in a terrible crash. The hero car decides to slow down just before the finish line and forgo victory. He then decides to go back and push from behind the crashed car so it gets second place and the hero car in third. Such strong acts of benevolence and self-sacrafice are the type of scenes that will impact kids. We need more of them.

Disclaimer: Sorry for my lack of independent movies viewed as they are often the better movies, as most of them are featured at the Fox Towers in Downtown Portland where I dread going because of long traffic and no parking. Oops, am I being political?