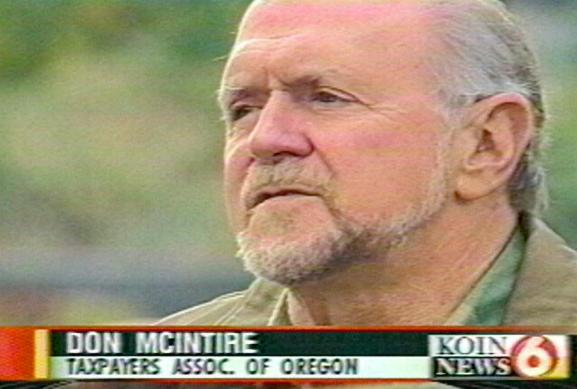 Thank you for your letter, which offers yet another reason for Oregon voters to support the Rainy Day Amendment. It reveals, after all, the fact that Oregon’s Governor has no clue as to what’s going on in his own state.

I must say, though, you might want to check your facts before releasing such an error-ridden note to the public. It is an election year, and you clearly want to keep your job so that you can keep the big spenders in charge and the taxpayers quiet.

Since it is apparent you are living on a planet ruled by special interests, not in the great state of Oregon, let me fill you in on some news: 162,000 Oregonian voters signed the petition for the Rainy Day Amendment. This fall, Oregonians will have the final word on whether or not to bring back responsible spending to our state. But perhaps that’s what you’re so afraid of””that hardworking taxpayers might just put an end to your government gravy train.
We all know who pulls the strings here in Oregon, and forgive us, Governor, if we say publicly it’s not you. Union bosses and special interests are openly running your campaign, so we, in turn, realize why you’re doing their dirty work. You want to keep spending recklessly, and you want the taxpayers to just shut up.

However, you might want to get a fact checker before you embarrass yourself further. A quick rundown of some of the errors in your piece:

1. Over 300 local donors have already given to the Rainy Day Amendment campaign, and that list continues to grow. We’re thankful to Howard Rich for helping us get our campaign off the ground. Unions””as you well know, Governor””have a whole lot of money to splash around to keep the special interests in charge. Out of state unions have already given $2 million to try and defeat the Rainy Day Amendment. We’re working to put the people back in charge. Just whose side are you on? Here’s a tip, Governor””or should we address this to you, Mr. Nesbitt?””you might want to keep it a secret that you’re against giving the people a say in state spending.

2. If you really want a debate, perhaps you should call up Governor Bill Owens of Colorado, who can tell you that Colorado’s spending limit””which, as you can read in Sunday’s Oregonian, is quite different than ours””was a smashing success. He’s already done so in several op-eds across the country.

3. “Anti-government”? We are for responsible government. The fact that you’re threatened suggests a little about your governing style.

4. The Rainy Day Amendment won’t cut a single penny of government spending. It allows spending to grow every year — by at least $2.6 billion in the first two years alone. Look it up, Governor. And, no offense, but if you can’t understand simple math, why should the voters trust you with a $45 billion budget?

We expect more distraction techniques to come from the people who want out-of-control spending to continue. You don’t care about the future of Oregon””you care about your own, taxpayer-funded paycheck and your kickbacks.

As a Chief Petitioner, I accept the challenge to debate the real leader of the government class in Oregon — Tim Nesbitt, recent President of the Oregon AFL-CIO. I will debate Mr. Nesbitt as many times as he would like between now and election day. Oregonians would be well served to find out more about the “power behind the throne” in our state. I suspect such a series of debates would reveal much about what’s really wrong in Oregon. If Mr. Nesbitt is unavailable or unwilling, I’d even take on the second in command, Governor Kulongski.

For more information go to www.rainydayamendment.com, or contact [email protected]