Business and Media Institute on the ABC Health-Care town hall debate: “While Obama had to field some difficult questions — from the audience and ABC — he faced no Republican critics of his proposals. The network also allowed him to dominate the program with long-winded and vague answers. Out of the 75 minutes the network dedicated over the two programs (commercials excluded), the president managed to take 60 percent of that time: 45 minutes to give 19 vague responses — not exactly the “dialogue” advertised by ABC:” 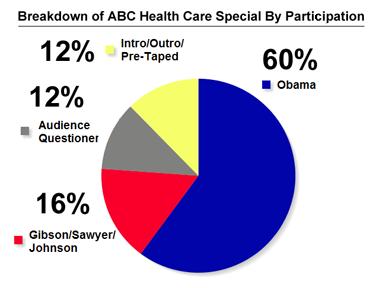