There’s been a great deal of criticism of President Obama’s handling of Syria lately, including by members of the media who are usually his cheerleaders.

The real problem with Syria, though, is that we’re about 100 bad decisions down the road. There’s not “one thing” we can do at this point to make things right with Syria. As they say, if you walk 50 miles into the middle of a forest, you’re going to have to walk 50 miles to get back out.

Pres. George W. Bush, whether you agreed with him or not, took concrete steps to stabilize the Middle East. His view was that of former Soviet dissident Natan Sharansky – democratic countries don’t make war on each other. Sharansky dedicated his book The Case For Democracy: The Power Of Freedom to Overcome Tyranny And Terror to the noted Russian physicist, Andre Sakharov. Sakharov said “Regimes that do not respect the rights of their own people will not respect the rights of their neighbors.”

President Obama has adopted a more hands-off, “lead from behind” approach to the Middle East. He’s allowed things to spiral out-of-control in Egypt, Libya, Iran and Syria – hoping that somehow things will work themselves out without strong U.S. leadership. Tyrants and terrorists flourish in such an environment. It emboldens them – to pursue nuclear weapons, to kills U.S. ambassadors with impunity, to threaten to annihilate Israel and to kill their own people with impunity.

It was a mistake for President Obama to make his “Red Line” comment without first consulting with our allies, and he should have first gotten Congress on board. Even President Bush got approval from Congress to invade Iraq, 296-133 in the House and 77-23 in the Senate. By not getting prior buy-in, President Obama left himself isolated and vulnerable. And it went downhill from there, including being out-maneuvered by Russian President Vladimir Putin.

A meme making its way around Facebook has Star Trek’s Jean-Luc Picard holding his head in his hands with the caption “The moment you realize an ex-KGB tyrant has stymied a Nobel Peace Prize winner’s attempt at war.” 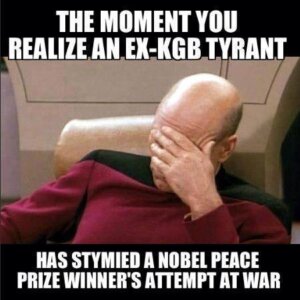 President Obama’s handling of Syria prompted Time’s Joe Klein to write “[President Obama] has damaged his presidency and weakened the nation’s standing in the world. It has been one of the more stunning and inexplicable displays of presidential incompetence that I’ve ever witnessed.”