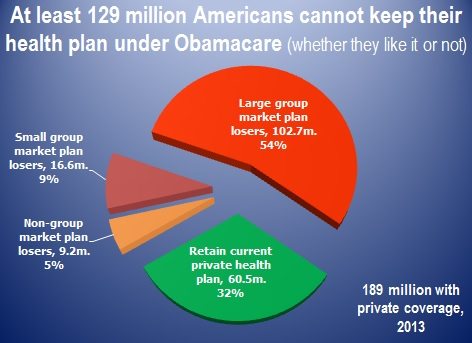 The Taxpayer Association got the call that our health insurance is being cancelled. Its an individual policy because we are a small non-profit. As a small non-profit we try to keep expenses low, so the plan is affordable as not a burden to our mission and the insurance is only used for high expenses.  Such plans the federal government is trying to exterminate out of existence. A follow-up call and another insurer agent’s input only added massive confusion over what is happening — is it being cancelled? grandfathered? or a forced change where I will have to pay more for a different plan. We are getting three different answers from three different people. Such confusion is a killer for small businesses and non-profits. The idea of health cost going up is terrible for non-profits because health insurance is already more expensive than office rent, phone, postage & internet combined — and that’s the economical plan!

Forbes Magazine writer estimates that up to 120 million could see their plans change.

The Wall Street Journal did a good analysis of why this is happening.

In drafting rules to put ObamaCare into effect, the Health and Human Services department under Kathleen Sebelius tightened the grandfathering eligibility to make sure even more people would be forced to switch to the excessively costly policies that Mr. Obama wants them to buy. Mr. Obama says he cares about your incentive to get preventive care or tests that you may not get if they don’t appear to involve a free lunch.

But the truth is, he wants you to pay for coverage you’ll never use (mental-health services, cancer wigs, fertility treatments, Viagra) so the money can be spent on somebody else.

A nod goes to the Los Angeles Times, whose coverage of the inequities of ObamaCare has been exemplary. On Monday, it set the political world afire with a story about thousands of Californians losing coverage. “This is when the actual sticker shock comes into play for people,” UCLA health-care researcher Gerald Kominski told the paper. “There are winners and losers under the Affordable Care Act.”

The press stinks at covering abstractions, which the health-care debate was until a law was enacted and put into effect. With real-world results now to unpack and examine, NBC News gave airtime to a 62-year-old North Carolina man whose monthly premium just jumped $800: “I’m sitting here looking at this, thinking we ought to just pay the fine and just get insurance when we’re sick. Everybody’s worried about whether the website works or not, but that’s fixable. That’s just the tip of the iceberg. This stuff isn’t fixable.”

The Affordable Care Act was never going to make care more affordable, except for those receiving a big subsidy at the expense of taxpayers or other insurance buyers. A non-listening press might have known better if it had paid attention in the most admirable moment of John Kerry’s 2004 presidential campaign, when the candidate disabused a generation of liberal reporters by saying that covering the uninsured might be desirable for other reasons, but health-care costs would be driven out of sight once the government began subsidizing another large group of Americans to overconsume.

ObamaCare probably won’t succeed in covering even a majority of the uninsured. It will succeed, though, in forcing millions of Americans to buy more expensive insurance than they need or want, because that’s the insurance Mr. Obama likes and will let them keep