It can be very difficult to figure out what all the numbers mean as we sift through the news coming out about the Affordable Care Act (Obamacare) enrollment numbers.

To aid in understanding the numbers and to provide some context, here’s a high-level overview of the health insurance enrollment numbers. 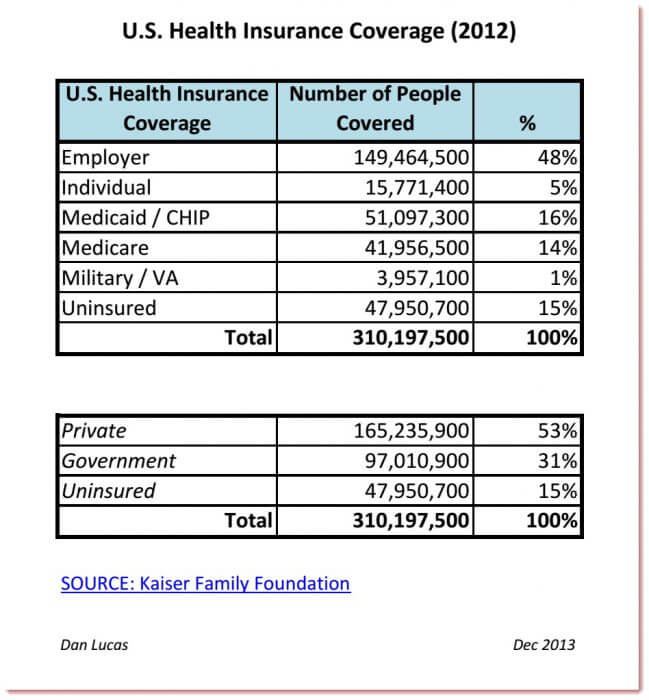 On Wednesday, the U.S. Department of Health and Human Services released the exchange enrollment numbers for October and November. So far 365,000 people have enrolled in the insurance exchanges. 44 of those are from Oregon.

The Congressional Budget Office (CBO) projections show 7 million people enrolling in the insurance exchanges by the end of open enrollment on March 31, 2014.

13 million of the 25 million uninsured will get coverage by expanding Medicaid – the government health care payment system for the poor.

The remaining 12 million of the 25 million uninsured are expected to get coverage through the insurance exchanges2.

The Medicaid expansion, as well as subsidies for the exchanges, will be paid for by a net $1.4 trillion in new federal spending over the next ten years.

How do people who are losing their existing coverage factor in? About 4 million Americans found out this fall that their existing health insurance was being cancelled because it didn’t meet Obamacare standards. In reaction to the political pressure from the cancellations, President Obama announced that he wouldn’t be enforcing the law if state insurance commissioners and health insurers wanted to continue selling non-compliant plans for one more year. While the president’s “fix” may help his party by pushing the cancellations out past next year’s midterm elections, it puts the viability of the exchanges at risk. Forbes reports that the “CEO of America’s Health Insurance Plans, the trade group, was also cool to the President’s plan, because it would incentivize healthy people to stay in the old market, while sicker and older people sign up for the new exchanges. This will exacerbate the problem of adverse selection, in which sicker people enroll early on, driving up the average health-care consumption per enrollee and thereby the cost of coverage.

Harvard economist David Cutler, one of the architects of the law, expressed similar concerns. ‘If it turns out to be a delay of a year, we can work through that. If it becomes a permanent situation that people who are healthier stay away and people who are sicker go into the exchanges, that becomes a very big problem. That could be the beginning of a death spiral. That is, you could have a situation where people in the exchanges are very unhealthy people with high premiums.'”

Our neighbors in Washington State experienced a death spiral in the 1990s – a collapse of their individual insurance market when they implemented similar health insurance reforms.

Interestingly, one of the big Democratic players in pushing the reforms through (when Democrats controlled both legislative chambers and the Governorship in Washington) said in 2012 that “A fundamental lesson we learned in the process—and that unfortunately was not learned in the federal process—is that health care is so big, so complex, so passionate, that it has got to have bipartisan support.”

1 The numbers from the Kaiser Family Foundation (KFF) vary from the CBO numbers in part because the CBO numbers only include “nonelderly people,” and they are categorized a little differently. For example, KFF shows 51 million people on Medicaid / CHIP in 2012, but the CBO shows 35 million “nonelderly people” on Medicaid / CHIP in 2013 – yet on their web site, when they’re not only talking about “nonelderly people”, the CBO says “On average during the year, Medicaid covered about 54 million people; and CHIP, an additional 5 million.”