Carolyn Lawson resigned this week. She was the technology executive for the State of Oregon who oversaw the failed development of the Cover Oregon website. In an article on her resignation, the Oregonian reported “Nearly three months after the federal deadline for a functional health exchange website, [Cover Oregon] has emerged as a technological train wreck and a PR nightmare. The state has paid more than $160 million and a fully functional site remains weeks — perhaps months — away.”

The technological train wreck and ultimate failure of Carolyn Lawson’s approach were predicted more than a year ago by former state Rep. Patrick Sheehan. And Sheehan warned Gov. Kitzhaber – who did nothing. Now that it’s too late, Gov. Kitzhaber is calling for an independent review.

As Oregon Catalyst reported back on November 12th

The failure also validates the warnings of former state Rep. Patrick Sheehan. In an interview with the Estacada News last December he was critical because the health insurance exchange was spending nearly $50 million trying to build a complex new system instead of licensing software designed for that purpose – for a fraction of the cost.

When reports started coming out around the October 1, 2013 launch day about Cover Oregon “glitches,” Sheehan commented “I’ve been saying this for more than a year – the tech implementation of Cover Oregon was one of the most wildly mismanaged and AVOIDABLE debacles our state government has undertaken. One of my last communications with the Governor was a request he fire Carolyn Lawson (in charge of the tech side) for lying to our Legislative Committee about progress and options available for a faster, cheaper solution. Instead, he did nothing.”

KATU obtained a copy of Sheehan’s communication with Gov. Kitzhaber for an excellent story they ran yesterday on the problems with Cover Oregon and Carolyn Lawson. 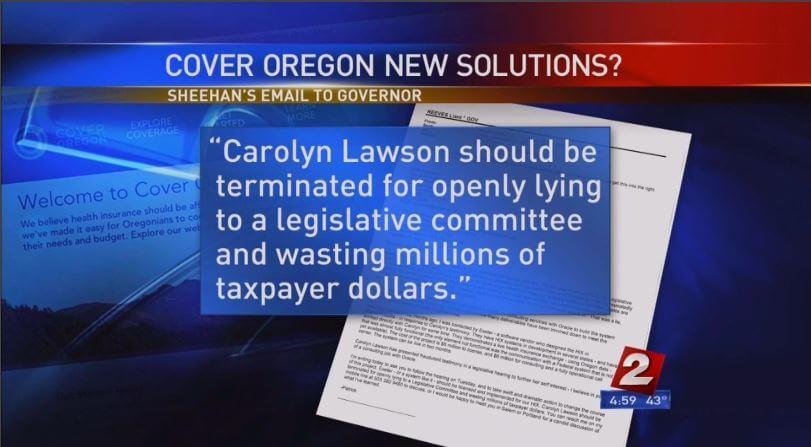 Dec 7, 2012 email from then Rep. Patrick Sheehan to Gov. Kitzhaber

The KATU story also talked about the software that was available to the state – that was designed for what Cover Oregon is attempting and is a fraction of the cost of what Lawson pursued. Former Rep. Sheehan had been asking Lawson for nine months before a December 2012 oversight committee meeting if such software existed and she had been telling him no. It the December 2012 meeting, Sheehan called her out for misleading the committee – noting that not only had she known of such software, she had actually met with the company – Exeter. Lawson then claimed that Exeter didn’t meet the requirements for what she envisioned for Cover Oregon.

The Associated Press reported this week that the State of Oregon is now looking at Exeter as an option for bailing them out of their rollout debacle.

So if Gov. Kitzhaber had decided to listen to Sheehan a year ago, thousands of Oregonians wouldn’t be facing a January without insurance coverage or without the promised subsidies they need to be able to afford their premiums. And the State of Oregon wouldn’t be out $160 million with nothing to show for it.