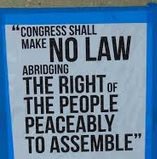 The Ukraine violent crackdown against Kiev democratic protesters provides a renewed reason for a boycott of the Olympic closing ceremonies — whether for attendees or TV watchers like us at home. The crackdown is in direct response to Putin pushing Kiev to pass anti-protest laws and the threat to freeze aid. This is part of an ongoing effort to keep Ukraine out of the European Union and closer to the control of Moscow. Putin previously threatened to withhold natural gas to the Ukraine, making this power play a real threat to the future and freedoms of Eastern Europe.

Putin has been choosing the wrong side of the world stage. Putin has been working to prevent the missile defenses in Europe. He thwarted United Nations action in the Syrian crisis and made things worse by arming Bashar Assad and then helping assist a false peace plan.   At latest count, Assad had killed 136,000 of his own people in addition to the witness of chemical weapons being used and greater instability for the entire region.

Following this is a crackdown on the free press. Putin has banned and expelled an American journalist (former Financial Times journalist) from entering the country, making it the first time since the cold war that this has occurred. Since 2012 the government has passed a dozen new laws and amendments aimed at rolling back the free press in clear violation of the nation’s constitution. The new laws are being used to jail or harass political activists, journalists and non-government organizations.   Freedom of the Press has not seen such threats since the Cold War making these actions even more alarming.

Last June, their parliament passed an anti-propaganda law that had the effect of banning free speech rights for same-sex advocates by outlawing any public demonstrations. The ability to peacefully protest in public being denied to gays is the same fundamental right that is being denied Ukrainians. It’s one of the most important American principles as well as it is part of the Olympic Charter which Putin happens to be hosting (and is currently the face of). Freedom to peacefully protest is something that the Left, Right and Center can all agree on.

Finally is the damage Putin has done to the Olympics directly. It has been the most expensive Olympics in history ($50 billion) almost double from 2007 Olympics. One official with the International Olympic Committee believes that a third of the $50 billion may have been stolen. All of these factors together give the Olympics a bad deal and help reward a leader who has gone out of the way to enact anti-democratic and bad Olympic decisions. It would be good to send a message by walking away from the closing ceremonies.