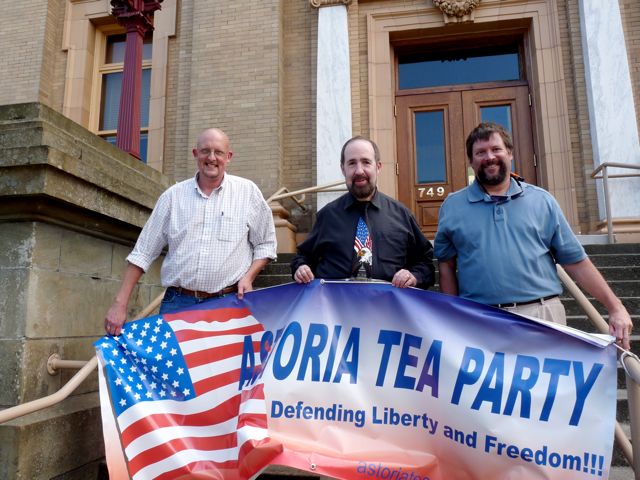 On Saturday, September 12, Cascade Policy Institute founder and Senior Policy Analyst Steve Buckstein [center photo] spoke to an enthusiastic crowd of about 80 people from the courthouse steps in Astoria. The event was one of hundreds of such “9-12″ events around the country, including a massive rally in Washington, D.C. that drew over one million peaceful protesters.

Buckstein talked about both health care reform and taxation. He told the crowd that while Americans witnessed a very eloquent President speak to the nation last Wednesday night about his vision of government health care reform, they should remember the words of this nation’s first president. George Washington said:

“Government is not reason; it is not eloquence; it is force!
Like fire, it is a dangerous servant, and a fearful master.”

So, Buckstein told the crowd not to mistake eloquence for governance. A very eloquent speaker can be wrong about the issues.

I haven’t read the 1,000-plus page health care bill in Congress, but I have read the Constitution of the United States; and there’s nothing in that founding document that gives Congress or the President any authority to run our health care system.

Of course, that hasn’t stopped them from controlling half of our health care already with Medicare, Medicaid, children’s health care programs, etc.

But as Milton Friedman pointed out a few years ago, you can watch health care costs go up as the government pays for more of it.

I want to make sure you know that there are at least three myths that the President and many Congressmen continue to perpetuate about health care.

The first myth is that we’re underinsured in America. Rather than quibble about how many people are uninsured at any given time, we’d all be better off if we realized that rather than being underinsured, most Americans are actually over insured.

That’s because most health insurance today, including much of what ObamaCare promises, is not so much insurance as it is pre-payment for future health care costs.

And we don’t pay ourselves, but allow a so-called third party, the insurance company or the government, to stand between us and our doctors.

The concept of insurance is that many people pool their funds to insure against unpredictable and costly events that will surely happen to some of us, but we don’t know who. Some people will get hit by a bus. Some will come down with cancer. Most of us can’t pay out of pocket for such catastrophic events, so we buy insurance.

Just like we buy auto insurance to protect us from the financial costs of serious accidents. But we don’t buy insurance to pay for our weekly gasoline fill-ups, oil changes or new tires. We budget for those everyday expenses.

What do you think your car insurance would cost if it did cover gasoline, and you could say “fill it up” with only a $5 co-pay?

But paying for such routine care through insurance simply raised the cost. We’d be better off purchasing so-called catastrophic policies for low premiums, and budgeting for the routine care we know we’re going to get.

Unfortunately, Oregon and many other states mandate that much routine care be covered by insurance policies, so we end up paying outrageously high premiums, and we blame the insurance companies instead of blaming the real culprit, the government.

ObamaCare would make this problem even worse, but we may not notice because rather than paying higher premiums, we’ll pay through our taxes, and our children’s taxes.

The second myth is that the profit motive is responsible for our high health care costs.

Drug company profits would pay for all our health care for only about eight days.

On the other side of the coin, the profit motive can be a powerful motivator to reduce health care costs.

You don’t have a Wal-Mart here in Astoria yet, but in the 2,500 Wal-Mart stores around America they’ve figured out how to reduce generic drug prescription costs from around $30 for a month’s supply down to just $4.

As soon as they introduced that program in 2007, other pharmacies began matching those $4 prices, so now you can go to Fred Meyer or Safeway or Walgreens pharmacies and get a month’s supply of hundreds of common prescription drugs for just $4.

Each of these big chains is a for-profit company. Yet each realized that to make profits in health care, they needed to offer something that would attract and retain customers.

The reformers think that profits add to the cost of health care. But profit is not a cost as much as it’s a signal that consumer needs are being met. Satisfy more consumers, and a business can earn more profits.

So, rather than eliminating profit from our health care system, we need to encourage companies to innovate and to earn profits by lowering prices to consumers.

Unfortunately, again ObamaCare will take us in the opposite direction.
No matter how much reformers claim that they want to introduce choice and competition into health care, their so-called “public plan option” will do just the opposite. And costs will go up.

The third myth is that health care is a right. We need to remember that America was founded on the principle that government doesn’t grant rights, it simply protects our inalienable rights such as those to life, liberty and the pursuit of happiness.

Our rights define what we’re free to do without interference; they’re not goods or services that others must provide for us.

Define health care as a right and cost control will go out the window.
Rather than trying to create an artificial right to health care, I suggest we find practical ways to drive health care costs down and quality up.

Make it easier for more people to afford health care on their own by getting unneeded mandates and insurance regulation out of the way.

In closing, let me give you one simple proposal that would work in Oregon and nationally to drive down health care costs and make insurance more affordable for everyone:

Allow Americans to buy insurance across state lines. Most states, including Oregon, prohibit their citizens from buying health insurance unless the company has plans approved in their state.

Oregon has many more mandates than some other states.

If we could purchase insurance plans approved in, say, Connecticut, we could save thousands of dollars a year and more of us could afford coverage.

Finally, if you agree that government involvement in health care is the wrong direction to go, then educate yourself about the kind of concepts I’ve mentioned here.

Ask tough questions of your elected officials. Many of them got an earful during August when they held town halls in their districts. Now that they’re back in Washington, don’t let up.

Call their offices, write letters to the editor, call talk shows, and make your voices heard, just like you’re doing today. Together we can take back our health care, and take back America.

The Tea Party movement got into high gear this year on Tax Day, April 15th.

But what is taxation really all about?

Some see taxation benignly as the way we pay for government services.

Others see it as an immoral transfer of money from those who earned it to those who didn’t.

Still others see it as an offensive method of funding activities they abhor””perhaps abortion, or foreign wars.

The Internal Revenue Service actually chiseled Supreme Court Justice Oliver Wendell Holmes’ definition above the entrance of its building in Washington. It reads:

“Taxation is the price we pay for civilization.”

Well, I disagree. Civilization implies a high degree of civility, of peace and harmony between members of our society. Civilized people reason with one another, we don’t use force or fraud to get what we want from our neighbors.

But Taxation ultimately rests on the threat of force.

“Pay up or we’ll take your money against your will, or even throw you in jail if you resist.” Taxation relies on the very tactics that civilized people are trying to leave behind.

“Taxation is the price we pay for failing to build a civilized society. And the higher the tax level, the greater the failure.”

So, whenever a state or national politician proposes to raise anyone’s taxes, ask him or her why they can’t find a more civilized way to achieve their goals.

If they tell you the taxation they propose is the price you must pay for a civilized society, then you might let them know that you just can afford any more of their so-called civilization!!

Promoting a truly civilized society means finding ways to meet everyone’s needs through voluntary transactions, rather than coercive ones.

It means resisting the urge to tax our neighbors to pay for our worthy cause, whatever it is, including national health insurance.

Most of our politicians in Washington haven’t gotten that message yet.

Most Oregon legislators haven’t gotten the message either. They recently voted on four big new taxes, two or three of which will be referred to the voters in January.

My organization, Cascade Policy Institute, has done research on the personal income tax increase and the corporate tax increase bills. Between them they threaten to destroy 70,000 Oregon jobs.

Killing the jobs of 70,000 Oregonians is anything but civilized. So please join me in helping to put these tax measures on the ballot, and then defeat them at the polls in January.

That will mean a more civilized Oregon, and it will send a message to the politicians in Washington DC that they can’t take Oregon voters for granted anymore.

They may even re-think their plans to tax us for their uncivilized national health care plan.

When Americans finally give up the idea that we can tax ourselves into prosperity, we’ll be on our way to reclaiming our country and becoming a truly civilized society.

This rally and others like it across the country today are a critical part of this movement. Thank you for adding your voices to this important effort.