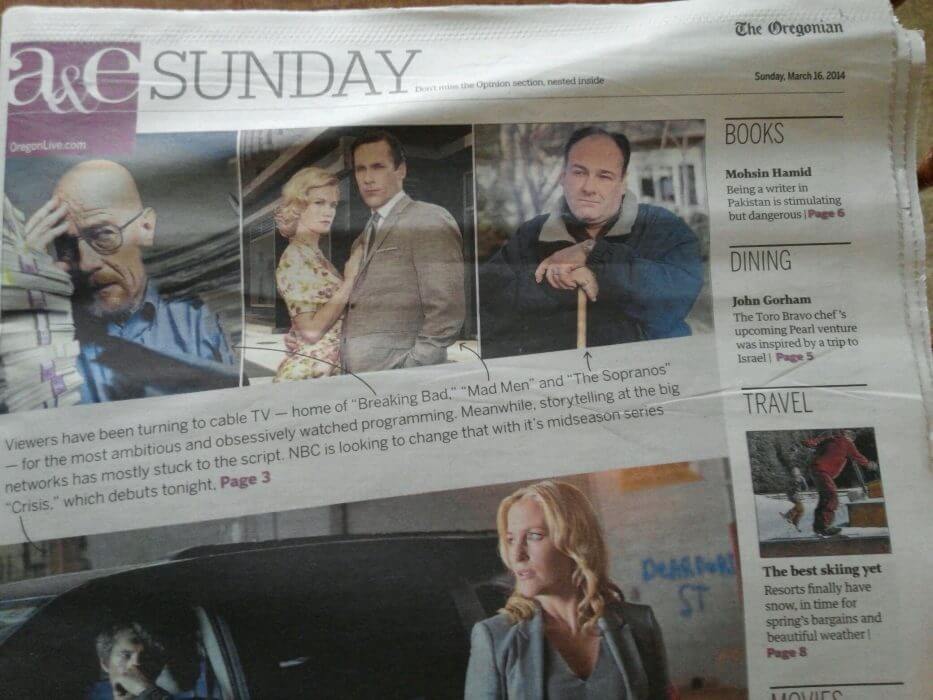 The popular Friday Arts & Entertainment (A&E) section of The Oregonian, which features movies, concerts and local plays, has been extended to the weekends.   Inside the Sunday A&E is…surprise… The Editorial section (via insert). You wouldn’t know it from the A&E cover which promotes TV shows and the content key which details what’s inside only lists books, dining, travel, movies, arts & puzzles…but not the editorial section inserted inside.  In light of news viewership plummeting among the emerging next generation, this just may be the attempt to reach them by popping up in the middle of their entertainment news to get their attention.

Reaching the next generation with news is critical. My 31-year old friend had no clue on 2013’s most headlined and most reported Oregon story which was the Cover Oregon meltdown. That is not a good sign for an informed society.

Last fall The Oregonian eliminated their Monday, Tuesday & Thursday delivery. Without it, I noticed that my local news intake dropped and was not supplemented by increased online local news viewership. The problem of larger newspapers is that you cannot fit everything into a webpage and retain the easy flow and structure of a print newspaper. Neither can you transfer the advertising advantages from print-to-web which comes with serious limitations and  cut newspaper ad revenue in half over time.

Almost immediately, the privately run delivery service offered to add in the undelivered days (picked up from central locations) at an extra cost. Even though the state’s largest newspaper does not issue papers for delivery on those three days they still print the paper for those days at certain news outlets. I took the delivery service up on their very expensive deal and now I am back to getting The Oregonian seven days a week.  It makes me think what just happened and how many others are doing it.

Watching The Oregonian Editorial Board go hip by making a surprise appearance in the entertainment news and watching the changes in delivery choices is just a snapshot of changing times.