221 years before Obamacare passed, James Madison wrote a pretty good description of Obamacare and its problems.

“It will be of little avail to the people, that the laws are made by men of their own choice, if the laws be so voluminous that they cannot be read, or so incoherent that they cannot be understood; if they be repealed or revised before they are promulgated, or undergo such incessant changes that no man, who knows what the law is to-day, can guess what it will be to-morrow.” James Madison – The Federalist Papers, Number 62, 1788

The James Madison quote is making the rounds on Facebook as a meme from the The Heartland Institute, a conservative and libertarian think tank in Chicago, with the comment “Sound like any recent legislation?” 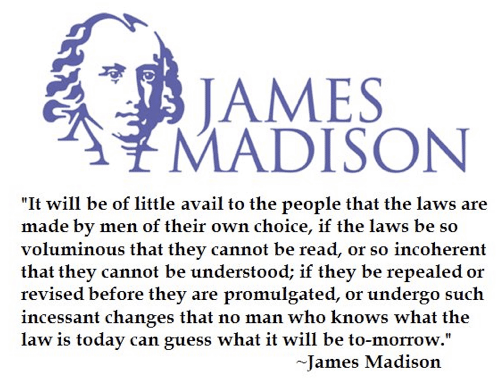