Another aspect of the poll put Kitzhaber’s image under the microscope. It showed that 42% of Oregonians had a negative view of Kitzhaber while only 44% had a favorable view. Kitzhaber is holding on to his approval rating by 2%. Roughly 14% were undecided. Richardson had a 69% “not sure” on his image. It must be noted that the poll was taken before Cover Oregon made national headlines for shutting down. 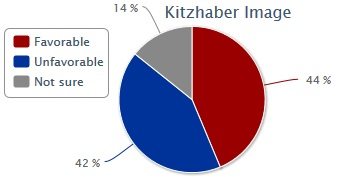